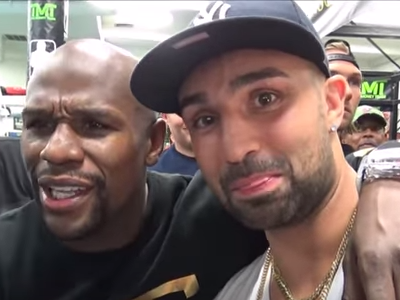 Paulie-gate was one of the most interesting aspects of the Mayweather vs. McGregor build-up leading in to the Aug. 26 showdown. Former boxing world champ Paulie Malignaggi was brought in as a sparring partner for Conor McGregor as he prepared to face Floyd Mayweather in what would be the Irishman’s pro boxing debut. There was a ton of fallout as Malignaggi left the camp early claiming he was disrespected by Conor and his team by leaked photos and edited video footage from their sparring. Now check out this new video as the cameras catch Paulie hanging out with his old friend Floyd as they hint at the whole thing being a setup in order for Floyd to get some inside info on McGregor.