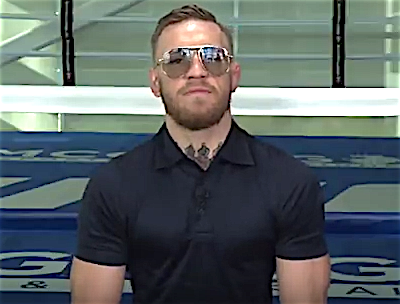 Will UFC lightweight champion Conor McGregor really be able to do the unthinkable? Will he, in his pro boxing debut, actually be able to defeat the greatest defensive genius of our time in Floyd Mayweather Jr.? With 49 career wins on Floyd’s record, no one has been able to beat him yet. Why does Conor feel he is the one to make history and succeed where so many others have failed?

With all the press conferences, media calls, disgruntled sparring partners, and everything else. We still haven’t heard much about just how Conor plans to fight Floyd. However, in his appearance on Conan last night, McGregor gave us a hint.

“I think the styles of opponents that Floyd has faced have moved in a certain way,” McGregor explained. “The boxing game is almost set in its way. I feel their feet are flat, they have no spring in and out. Compare that with a mixed martial artist; they can bounce in and out at a fast tempo. So I believe I will paint pictures in there that he has never seen before or the boxing community have never seen before and that will cause him big trouble. Factor that in with the precision and punching power. It only takes me one shot. I have KO’d men inside three-seconds. I won the UFC featherweight title in 13-seconds. So factor all those things, plus with the punching power and precision, it’s over for Floyd and that’s it.”

Is that how the Irishman plans to approach this, by bouncing in and out and picking angles reminiscent of a Lyoto Machida or Stephen “Wonderboy” Thompson point karate style? Hmmmm… it will be different, that’s for sure. How will it look in a pure boxing scenario and will it be effective against the best of our era? We’ll find out on Aug. 26!