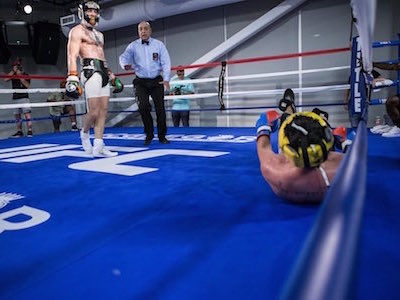 It’s been back and forth from Team McGregor and Paulie Malignaggi for weeks now, even prior to the New Yorker entering Conor ‘The Notorious’ McGregor’s training camp for his August 26th bout with Floyd Mayweather in Las Vegas.

Before they were scheduled to be training partners, Malignaggi had said he would “knock McGregor’s beard off” and the exchanges weren’t what you would describe as amicable. However, then the former boxing world champion changed his tune and said he wanted to help the Irishman ‘become better’ by being a part of his camp.

McGregor clearly hadn’t forgotten those words, and when it came to a twelve round spar, it was akin to a fight, complete with referee and corners. Team McGregor released an image of Malignaggi on the mat, which was the revival of the ill-feeling as Malignaggi felt as though he was being disrespected, and the actuality was being twisted.

Cue several TV shows, interviews, and many social media posts. Paulie asked for the unedited footage of the sparring to be released in full to show to real version of events, but instead the UFC’s Dana White posted some heavily edited footage that weighed in McGregor’s favour.

The edited footage appeared to back up Team McGregor’s version of events and fans were quick to deride Malignaggi as a liar, attempting to save his own ego. Public support seemed to sway in favour of ‘The Notorious’, with some surprised at how well he appeared to handle a former two-weight world champion.

It didn’t sway the bookmakers, with McGregor’s betting odds remaining a stable 7/2 for the upcoming Mayweather fight, but there was a definite shift in the fans’ consciousness as they began to respect the pure boxing ability of McGregor. Detractors were quick to point out that a retired Malignaggi wasn’t at his best but the same detractors said he wouldn’t be able to handle a good amateur so it did offer a harsh retort.

However, the American wouldn’t let it lie there. Not only was he convinced the footage backed up his recollection but he resumed calls for the entirety of the footage to be shown, unlikely as that is ahead of the Mayweather bout.

Pushing my head down with right hand as he’s draggin me in that direction by it then throwin the left, the push down is with right hand. https://t.co/txdK1ZQsIi

He has had some support in the media, but not everybody was sold by Malignaggi’s explanation. “You can’t convince groupies,” he offered, firing back at the thousands of tweets that came his way.

This whole circus has certainly been a good bit of entertainment and has brought even more eyeballs to the upcoming contest, but let’s remember that on fight night none of it matters.

McGregor will still have to go in there against arguably the greatest to ever step into the ring, and Floyd Mayweather’s self-importance will mean that there’s no way he will come in unprepared. His ‘zero’ is everything. A noble performance from McGregor would be more than enough for a moral victory but he’s still hoping for one of combat sports’ biggest upsets.