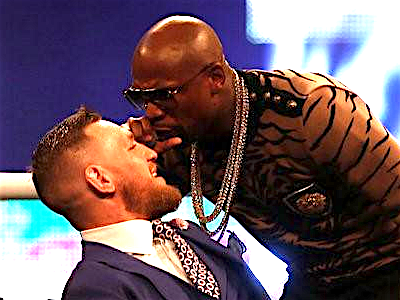 The Nevada State Athletic Commission met today on matters regarding the Floyd Mayweather Jr. vs. Conor McGregor boxing match. From this meeting came the announcement that Robert Byrd would be refereeing to the tune of $25,000. That’s 25K for 12 rounds of boxing.

The judges will be Burt Clements, Dave Moretti, and Guido Cavalleri who will all collect $20,000 to watch the hyped bout ringside. Oh, and they will also be scoring it.

The NSAC approved a one time exemption that allows 8 oz gloves in the fight instead of the previously approved 10 oz. The Association of Ringside Physicians passed around a release ahead of the meeting expressing their concerns.

The Association of Ringside Physicians understands that consideration is being given to amend current regulations, and in so doing, permit the use of 8oz Gloves in the forthcoming boxing match between Floyd Mayweather and Conor McGregor. This is a bout that has already been set a specific weight class. Unless there is scientific evidence to support the view that such a change might improve the safety of this bout, we would strongly caution against allowing current regulation to be over-ruled. To do so would also set a precedent for future bouts.

Floyd posted a relatively recent request on Instagram for the 8 oz gloves and McGregor quickly accepted. So the use of the smaller equipment came about from social media posts. NSAC Chairman Anthony Marnell was not happy about it a all.

I do not like the Nevada State Athletic Commission being used as a pawn in a social media bout. Between these two, that part of this request pisses me off. This body is not the subject of two fighters to create social media stir and other controversy to sell tickets and to sell DirecTV.

Mayweather vs. McGregor pops off on August 26th inside the T-Mobile Arena in Las Vegas, Nevada.

This is predicted to be the fight of the century and should be quite entertaining. If you’re looking for a little action, click here to place a bet on this boxing match.