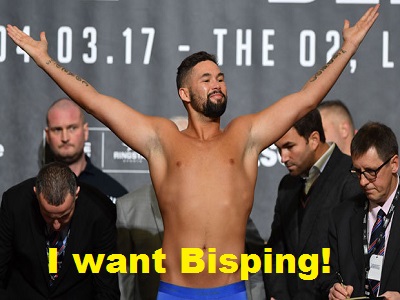 The boxing and MMA crossover bug is catching and I’m okay with it.

Creed film co-star and former boxing champion Tony Bellew called out UFC middleweight champion Michael Bisping when he spoke with Sky Sports. The proposition he had was a dream for combat sports fans. He wants to tussle in The Octagon and then in a boxing ring!

I can wrestle, I can grapple, I punch hard, I can kick and I’ve got some kickboxing experience…You can forget about me getting in the cage with Jon Jones – not a chance.

But if you’re asking if I would get in the cage with a puncher in the UFC? Mike Bisping is a guy who is predominantly known as a puncher and he’s a very strong wrestler as well.

I think I could get down to 185. If the money is right, then Tony Bellew would happily enter a cage or a ring. Maybe let’s do one of them each.

I’m a Michael Bisping fan, but if the money was right then the fan stuff goes out the window.