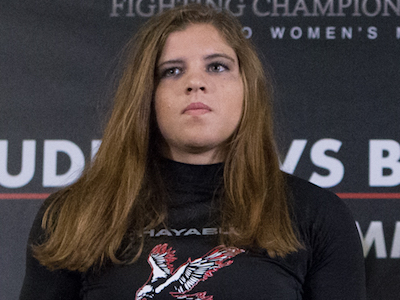 Miranda Maverick made her third appearance in the all female promotion Invicta FC in July where she racked up a unanimous verdict against decorated grappler Gabby Romero. The 20 year-old Missouri native today stands as one of the brightest women’s MMA prospects in the sport. She recently took some time out to answer a few of our questions.

When you look behind and realize that this is how far you have made, that too at such a young age, how does it feel? What according to you is your greatest achievement?

To make it as far as I have at such a young age is a blessing I can say would have never happened without help from God, friends, and my family. So many people have helped mold me, not only in my physical preparation, but in my mindset to continue marching forward in life and in mixed martial arts.

Not only one of my greatest achievements, but also one of the best days of my life, getting invited to Invicta Fighting Championships to make my debut was an incredible accomplishment. I am now the highest ranked for my age in the world in MMA.

An opinion which comes out again and again is that MMA isn’t meant for women. You in our last interview talked about this.  As someone who practices MMA and has many fans, what are your thoughts of people who refuse to accept that women too can fight?

I think many people hold to the traditional idea that women don’t belong in the sport because they are fragile and shouldn’t get hurt. In my view, MMA is a way of displaying pure talent, in its rawest form. In fact, I am doing research over the stereotypes surrounding women’s MMA this coming fall.

You were scheduled to face Mandy Polk at Ozarks Combat League. What happened? Will you be trying to get a rematch against her?

As far as the OCL fight that was cancelled against Mandy Polk, I have no reason to seek a fight against her. I feel like I am out of her league at this point. She had her chance and I was really looking forward to fighting in my home town, but due to last minute notifications, the fight was cancelled and I will probably never fight in Springfield now.

Women’s MMA has gained a lot of attention in the past few years. What are your thoughts on the evolution of women’s MMA? Do you think that women MMA fighters have cemented their spot in the main stream media? You belong to the relatively younger batch of fighters. What do you think will be the challenges for your generation of women fighters?

Since women’s MMA hit the UFC scene and Invicta was created to provide a solid organization for women to show their skills in, I think it has become more serious and really became a sport that will continue to expand. So many women have gone on in the sport to become inspirations by living fulfilled lives and showing strength, intelligence, and respect comes with MMA as well.

Being one of the young women in the sport, I see nowhere but up for myself. I haven’t even reached my prime, and continue learning and improving each fight to the point I laugh at and am embarrassed about my previous fights. I will keep moving on and I feel like those after me will continue having more access to new technique and better gyms, always improving and evolving.

In your last fight you faced submission specialist Gabby Romero. She was coming off a huge win over Meng Bo. What are your thoughts on your performance? Where does this win put you? What do you think is next for you?

This last fight I had against BJJ black belt Gabby Romero was embarrassing. Yes, I won, but there were so many opportunities in that fight for me to knock her out and end the fight. But I respected her ground game too much. I managed to escape her submission attempts and in hindsight probably could have held my own on the ground too if I had not have been so worried and hesitant. On the feet I was dominant and should have continued to set up strikes constantly, but was once again worried about getting taken to the ground which ended up not being as big of a concern as I had expected. However, next time I enter the cage I’m letting myself loose and am going to be seeking to finish the fight, whether standing or on the ground.

You failed to make weight in your last strawweight fight for Invicta FC. Is that the reason why you are moved up a weight class? Did you feel more comfortable at 125 and felt it was a safer weight class for you? What weight class will you continue in?

My last fight was at 125 pounds (flyweight) and the weight cut was much easier for me, but I felt small compared to others in the division. In the future, I hope to be able to go back down to straw weight, but for now I have other priorities along with fighting that make drastic weight cuts hard.

Whom do you think are the top 5 greatest women MMA fighters of all time, women who have not only given exemplary performance in their fights but have also helped in the growth of the sport and have made it possible for women to have their place in some of the biggest MMA promotions? Why?

Miesha Tate, Leslie Smith, Ronda Rousey, Rose Namajunas and Jo Calderwood are all women who stand out in my mind as helping to put women’s MMA in the spotlight. They have been pioneers of the sport, and with their varying personalities, styles, and looks have brought many fans to the sport, and shown that fighters are more than brawny brutes. They can be smart, have a cause, have other talents, and can represent respect and humbleness.

MMA is notoriously known for being a negative sport. Time and again athletes have quit the sport because of the draining negativity the sport has around it. Have you had any negative experience so far? Did the backstage politics ever affect you?

As many others in MMA, especially the women, social media can be a bit harsh. There are several creeps who show attention to us, and the haters can sometimes be a lot to bear. However, the good in the sport, such as the fans that stick up for us and the inspiration we see evolving from the sport drown out the negativity.

Thank you to my fans for taking the time to find interest in what I do and thank you to God, my family, my friends, and my sponsors for supporting me in this journey. #feartheMAVERICK #alwaysforward

Thank you for your time.