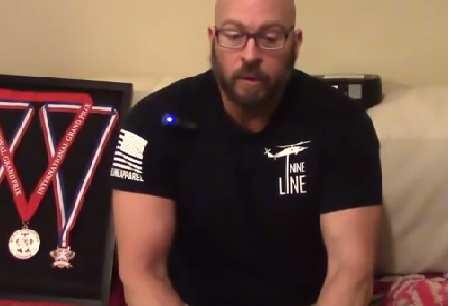 Jason Blaha has overcome what is apparently an incredibly debilitating disease to continue to powerlift apartment buildings connected with a telephone pole, and be a CIA ninja. He has been exposed time and time again, but he is still out there training in invisible martial arts and refusing to tell viewers what he has black belts in because their head may explode.

Blaha claims to be a bad ass with two black belts that he has continually refused to disclose the styles they were earned in. He is also accused of allegedly taking a disability check while working close to if not a full time job which is a no no. He has reportedly threatened those who questioned him for outing that he is just another guy living in a fantasy world.

He is just like thousands of what are sadly people related to martial arts who exploit its allure to market themselves. You’ve seen my Ashida Kim and Bart Vale articles. Blaha is far worse in his claims. He’s not a victim like Jack Decyk might have been of someone taking something he said and sensationalizing it/presenting it as if it came from Decyk himself. No, Jason has lied to himself so many times that it’s real in his head.

Just a heads up… His username is “BodyByFinaplix” on the Elite Fitness forums, and “darketernal” on the David Icke forums. Ignore those posts please or risk going blind from reading them.

Blaha claims to be a championship target shooter trained by his hero green beret father starting at 6 years old. He can apparently shoot the balls off of a flea at 1000 yards and land headshots 100% of the time.

He – I can’t help but laugh when typing this one – was almost as ninja as Frank Dux. Don’t worry. Dux article coming very soon. Jason claims he was a mercenary assassin for the CIA in their “Special Activities Division” and he proves it by mispronouncing their motto “Latebra Factum” often. He trained at the mythical assassin farm in Langley, Virginia with what had to be other members of the Avengers. Guaranteed that Hawkeye asked for his autograph.

He is apparently adept at stalking, and looking at this bald neck-bearded man child, that is not a surprise. Jason says he can kill someone so hard that they never existed and there will be no evidence left in a molecule of space at the crime scene. This is because he was trained in knife fighting and could kill enemy scouts in a manner consistent with movie assassins. Maybe Hollywood uses him as the mold for operative characters? Check out this video of him talking about some of his CIA experience and try not laugh.

A man named Layne Norton brought a lawsuit against him. Blaha was such a bad ass in the CIA that the US Embassy protected him unlike Navy SEAL sniper hero Chris Kyle. Going by this claim and the insinuation he was more of a hero than Kyle we can surmise that ninja Blaha had more than Kyle’s 160 confirmed assassinations. This guy is a hero. He also receives a special government pension with a sealed record for his amazing CIA work. This explains why he can’t hold a real job and assaults the public with his verbal diarrhea as a profession.

Add on to what had to have been 20 years of training to become the deadliest US assassin in history that he worked as a private military contractor recruited by the – holy hell this is hard to type while laughing – recruited by the Clinton administration out of high school. The reason they recruited him is because he was the deadliest high school target shooter they had ever seen. He was just like Chuck Norris because he was sent to fight the drug cartels in Latin American countries alone. All of which makes sense if he was able to shoot stationary targets surrounded by teachers at close range in perfect conditions. Guess what? He never was a target shooter and the US government doesn’t monitor high school kids for target shooting…

Then, dear God make it stop, he was sent to the middle east to kidnap and torture terrorists. After all of the killing he had PTSD. I’m guessing he really does have PTSD since his training must have must have been brutal when it started twenty years before he was born. Oh, and he committed war crimes and, I’m not making this up, he claims he was protected from prosecution because of his hero status.

One of the funniest, I mean awesome stories was how he was pursued by attack dogs and squadrons of federal agents from one of the countries he blew up by himself. He stole a truck, fought off hordes of agents, and was taken prisoner by choice only to have his Delta squad of commandos break him out of prison because they needed him to rescue them again.

Here’s a video of someone calling him out on his stolen valor claims:

Then, Blaha was a hitman and eventually turned down an Army offer to become an Officer. This was a hell of a feat since he never attended West Point or most likely was busy flunking high school because he saw the value of making BS Youtube videos instead. He also refused an offer to be a medical doctor because of his imaginary “147 IQ” and double major in Psychology and Nutritional Science 4.0 GPA without studying of any kind. Keep in mind all of this means he was training probably 40 years before he was born.

He is also a former male model and street racer all while he wasn’t being the greatest competitive eater of all time. He set a record by eating over a dozen large pizzas in under two hours. He ate 29 pounds of food in under 120 minutes…

He has played in an honor band and was an accomplished jazz musician AND he did all of this when he built hydrogen compressors. Training must have started 60 years before birth if you are keeping track.

Later, Blaha would claim all of his 3-4% body fat muscle pictures were lost in a fire and during this time he ran his own steroid lab with Walter White or his equivalent from 2000-2004. I can’t continue…but I must. I am surprised he didn’t claim that the show was going to be called “Breaking Blaha” until he disappeared in to another CIA solo mission to assassinate the entire continent of South America.

One of the greatest claims of this clown is that he has a full head of perfect hair and shaves it by choice because chicks dig the unique shine of his dome.

Oh he also doesn’t think he would be a good pedophile even though his family has a solid history of it… Just listen to this insanity.

By now you have to be as stupefied as I am. This guy should have been on every magazine, received hundreds of medals, and been the next president of the United States. I’m serious, aliens have contacted this guy for knowledge. It would not shock me if Blaha could time travel and create his own pizza filled worm holes with his 42″ manhood.

Now…the reality check from his ex-wife via Blahapedia…

He didn’t actually go to Texas A&M. He went to a community college in the same town called Blinn College, probably with the intention of transferring over to Texas A&M but failed to do so. He has no academic credentials in exercise physiology, nutritional science or biochemistry, outside of what he may have learned during his brief time in community college, nor has he ever coached anybody.

I could literally go on for hours, but my fingers hurt worse than Jason’s trying to jam his key in his door to escape the pizza eating paparazzi that follow him around. This guy is so delusional or maybe it could all be a big troll on us right? NOPE. People who know him confirm that he acts as if he believes all of this happened and refuses to admit that he is lying when presented with scores of evidence to discredit his “credentials”.

If Jason had done all of this – the required training adds up to no less than 80-100 years before his birth date in order to learn, train, become proficient at, and perform as superhuman like as he claims. Maybe this drop of sweat on the underside of a flea’s balls excuse for a Youtuber really is a time traveler.

Well played Jason and thanks for the unintentional laughs.