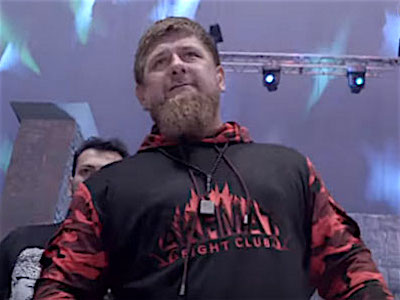 What would you do if you were a dictator of a small country, besides killing all of your political opponents? If you were Ramzan Kadyrov, Chechnya’s dictator, you would create your own MMA Empire. And that’s what Mr. Kadyrov did. He has his own empire of MMA fighters, and it’s probably Chechnya’s biggest export to the mixed martial arts leagues in America according to MMA News Review.

Many of the fighters that have been produced by Kadyrov’s MMA empire never make it to the U.S.A. to fight, but instead are filtered out for his private Special Forces militia. It’s a win-win for Mr. Kadyrov.

So, basically MMA fighters in Chechnya are trained with unconditional support from the government. Kadyrov is so much involved in running the club where MMA winners and brutal soldiers are created and which he named after his father that no decision can be made without him. The club has 5,000 boys and men, which he oversees, funds and directs. He is wholeheartedly involved in it and has made it a cultural phenomenon across the North Caucasus region. Young men come to be enlisted voluntarily.

If you read Fight news MMA and Boxing, maybe you’ve read Kadyrov’s comments issued through HBO’s “Real Sports” where he calls for ‘fight to the death’. He actually challenged the UFC to put up their best fighters against his Akhmat MMA fighters, where the fights will be decided by death.

Note that Kadyrov runs Chechnya as a dictator, a small Muslim country within Russia that he took over from his father who died in 2004 and which has unconditional support from Putin, so it’s pretty apparent that he lives in his own ‘Mortal Kombat’ world. He was brought up to be a warrior, and if he failed he risked rejection from his powerful father.

The entire point that Kadyrov wants to make with his ‘fight to the death’ tournament is to show that his fighters are the best in the world; fighters that he creates to be killers on command, that probably have rejected their personal lives and families to be Akhmat fighters unlike regular UFC fighters here in the real world. And all they want is respect from their leader for whom they are prepared to die in such a spectacle against the Western World.

MMA is a fighting sport, but there are limits to everything, and here those limits are called sportsmanship. MMA fighters should be brought up with ethics and morals, to be the perfect fighters, but fighters with dignity and not just killer machines conditioned to die on command. It’s sad when people like Kadyrov abuse sports for their own amusement without any kind of inhibitions regarding death.

The UFC hasn’t responded yet, but it’s reasonable to expect a refusal of such madness. Death match fights are fun to watch, but in Hollywood movies. In reality we are ruled by compassion, empathy and chivalry, and most of all sportsmanship.