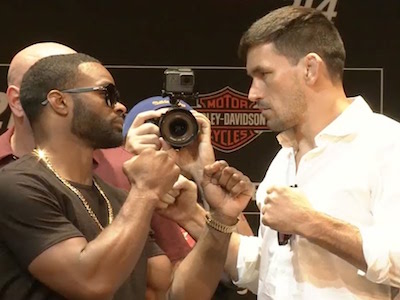 As UFC fans await the bout between Michael Bisping and Georges St-Pierre in November for the middleweight title, it seems many people will have to weigh the outcome with the Saturday night bout that paired Tyron Woodley and Demian Maia. Tyron Woodley clearly went into the fight to “defend” his title by accurately dodging more than twenty takedown attempts from Demian Maia. After twenty five minutes of making his disillusioned opponent crawl up from several missed takedowns, Woodley’s stubbornness paid off, as the judges declared him a winner. It was an easy but cowardly win to me, and MMA fans should thank sites where you can bet on MMA.

Such defensive sequences only happens in MMA, which triggered UFC president Dana White to give GSP-Bisping a nod after watching the biggest pay-per-view so far in 2017 splashed with boredom and monotony. Woodley vs Maia is one of those fights that trigger people to start discussing the type of entertainment that bouts should bring to the octagon, especially in a tile fight. However, some fans might praise Woodley for his dexterity and well-calculated executions, which practically showed his desperation to retain his title.

On the other hand, some already saw it as a 25-minute failed mission by Demian Maia to bring down Woodley, who ingeniously belittled Maia’s aggression. It was so evident that Maia put his face on the line of Woodley’s fierce jabs with the aim of dominating the fight with a successful takedown, which never materialized. Similar to his fight with Stephen Thompson, the Woodley vs Maia fight seemed unfinished. Even though he successfully avoided all takedown attempts from Maia, we did not see a moment when Woodley stepped up offensively to maul his opponent. He switched his heart, mind, muscles and soul to defensive mode and never enacted any practical game plan to finish the fight in a big way.

In one complete analytical sentence for this fight, Woodley was trying so hard not to lose, while Maia was dying to win; a fight narrative rejected by Dana White. With an almost clean defensive record during the fight, one fails to understand why Woodley could not get it done. The enjoyable and nerve-wracking UFC we know would be so boring if fighters continue with the Woodley mentality of only focusing on neutralizing opponent’s offensive moves. Without misinterpreting my sentiments, I mean, fighters should make the Octagon interesting and even if it doesn’t turn out to be a brawl; instinctual self-preservation should not be an objective, especially in a title fight.

Condemning Woodley for his cowardly plan mostly points towards the fact that he is known to destroy opponents. He clinched the welterweight title after knocking out Robbie Lawler, and doing the same to Dong Hyun Kim as well. However, his fights against Thompson and Maia who are known to be fascinating contenders killed the excitement valve. Honestly, Woodley has a knack to simplify his approaches and even if he goes down as the most unpopular champion, then his style is to blame. Woodley charmed an audience that appreciates execution rather than a brawl, and I am certain both St-Pierre and Bisping appreciated the Saturday night bout.