Fightmetric.com is one of our all time favorite combat sports related sites. They take just about every single stat from a bout and plug it in to a dynamic, linkable, and searchable format. You can keep track of a fighter’s rise and decline, check stats for fights prior to and after a big loss, and so much more. This is not a paid plug, but the site is pretty darn cool.

Dana White was angry at Tyron Woodley after setting the record for least strikes attempted in his successful title defense at UFC 214 on Saturday. Not a good start to a lasting title run. How can we defend this to make it not sound so bad for Tyron…

Let’s use Georges St. Pierre to try and help Woodley justify the sad record. GSP was never the same after getting knocked out by Matt Serra and he once, according to Tommy Toe Hold, saved the planet by taking an alien down and laying on top of it for 25 minutes. Woodley may have been spooked by the thought of Maia doing the same to him, being held down, and used as a rubber training dummy for a BJJ expert. A performance like that sure would kill your confidence. We will give him this – Woodley did what he had to do to win – which was not much.

Before you look at the stats just remember to take note of the takedown percentage and strike computations closely. Maia was 0 for 21 in takedowns and Woodley’s striking speaks for itself. 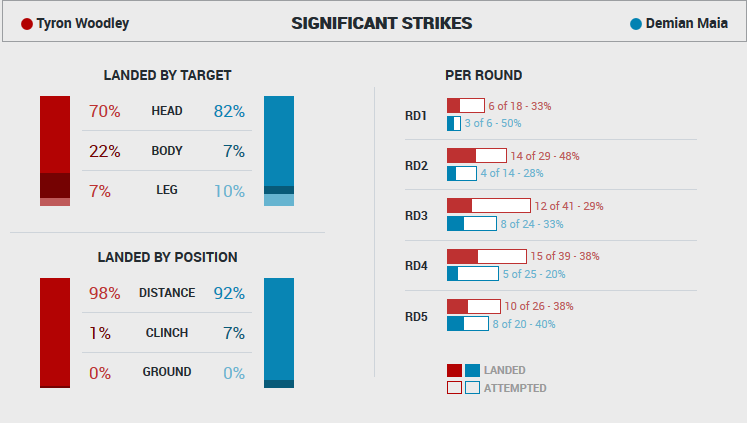 I was blown away by how little was done in this fight and seeing these numbers explains why.