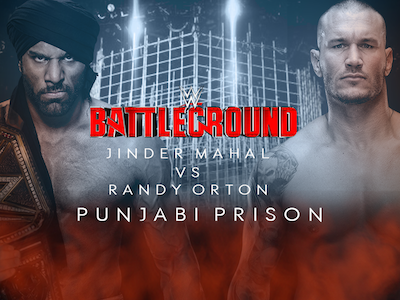 I swore I would never watch another WWE event unless the writers fixed their stupidity.  After watching the Battleground show Sunday night I can assure you they have not. The event was subpar to say the least and baffling beyond measure in some of the booking choices.

Over the years WWE has been struggling to stay relevant with the mainstream crowds. If it wasn’t for The Rock in Hollywood and John Cena to a lesser extent they would be diminished in visibility.

Wrestlemania will always be a draw and heralds the promise of a reboot for the next year’s booking for disgruntled fans. Unfortunately, just like in elections we wake up to the same old same old and nothing’s changed at all. Besides Roman Reigns there are no certainties. Reigns will be shoved down our throats until we swallow or choke on him. Odds are we will need the heimlich before we digest the hated Vince McMahon lust object. Wrestlemania will draw crowds because of its size, it’s on TV, and it’s a spectacle. NASCAR appeal is similar in the fact that it is on TV and the events are very large. Humans love big events even if it was the first time a turd balanced on the edge of a spoon. If it was televised and in a stadium they would be there. Wrestlemania is a turd on a spoon.

Let’s just get to the train wreck.

I didn’t watch the pre-show because I can barely stomach the product as it is with the top stars.

The first match was Usos vs New Day and I kind of liked it. When wrestling is the focus and not bad acting and writing it works. Matches like this keep people hopeful that wrestling will be great again. Unfortunately, it never reached the heights it could have, but it wasn’t bad by a long shot. I love both of these teams and the Usos as they are now are better than the neon dancing gimmick they had. In fact this match is going to get a 4/5 star rating. New Day are your new tag team champions. I liked this just a little less than the ladder match at Mania 33 earlier this year.

Shinsuke Nakamura vs Baron Corbin was next. This pairing is questionable from the get go. Shinsuke needs someone who can keep pace with him and Corbin is a lumbering powerhouse who slows him down. Nakamura vs Styles is a good example of who the Japanese star should be facing to bring out the best in him. Corbin needs a feud with someone the size of but not as athletic as Nakamura that can bump for him and make him look like a veteran. The match was fine though. It gets a  3/5 rating with Nakamura winning by DQ.

Women’s Fatal 5 Way…what is wrong with WWE? The only thing WWE knows how to do is write awful twenty minute talking segments and cram as many women in to a match as possible. They were doing okay with feuds and matches when Charlotte was the top star and then it went downhill. We are back to the old Diva battle royal or six team tag matches. This match was messy and typical. Two women in the ring while three are on the outside, repeat. Natalya wins and will face Naomi at SummerSlam causing many to plan on turning off their TV when they come on until then. Two bland women with mediocre promo skills are going to build to a match at SummerSlam? This match gets a 2/5.

Kevin Owens and AJ Styles did a decent job of trying to save the show. Both are outstanding workers, but for some reason this wasn’t their best outing. The match ended when Owens pinned Styles for the US title. Two of the best workers in the business relegated to the mid card to make room for a dumpster fire of a main event. I’ll get to that later. 3/5 but should be lower for the ref slow counting AJ and making him look weaker.

John Cena vs. Rusev is the smoking gun that WWE has no idea what fans want. This was the dumbest match setup since the Judy Bagwell on a forklift match. It was basically Cena needed to get the American flag and return it to his podium, or whatever they called it before Rusev could return the Bulgarian one. Crap match, it pissed me off, and I’m not going to talk about it that much. Cena won and this match gets a 1/5. Garbage. Vince and Steph still think we want Super Cena representing the USA against the evil foreign heel brute. At this point I was ready to turn this drudge off.

Sami Zayn vs. Mike Kanellis was in the death spot or the lead up to the main event. That spot has to be more exciting than the previous match but not too exciting as to kill the main event. It was okay but Sami winning was odd since Mike was gaining so much momentum. This, this is why I no longer watch on a regular basis. Wins and losses feel pointless and no one has lasting momentum anymore. This gets 2/5 and should have been more.

Ladies and Gentleman…the garbage pail…the dumpster of a main event.. the PUNABI PRISON match. Good God. Randy Orton has been in some of the worst matches of 2017 and this was one of them.

First, the referee calls for the outer structure to be dropped down. We are told that a wrestler must escape both structures to win the match. There are no pinfalls, no submissions, no count outs and no disqualifications we are told. Each of the 4 doors will be raised when called for by a competitor but after 60 seconds, the door will shut for the duration of the match. The outer structure has no doors and the only way to win is by escaping both structures before your opponent. If this was two popular veterans with charisma and the ability to sell a move effectively MAYBE it would have been okay. It was a fruit stand.

The Singh Brothers made an appearance, entered the structure, and saved Jinder from a loss via RKO which confused my friends and I. Isn’t the point of this match to keep others out? Long story short I felt I was on something watching this. It was just odd. The ending saw the return of The Great Khali who shook the cage and made Randy fall. Jinder escaped while Khali choked Orton through the structure to give the champion the time he needed. If Khali is back full time as a bodyguard I guess I’m okay with it, but if he’s back as a performer God help us all. Get your remotes ready when his music hits. This match gets a generous 2/5.
The event itself gets a 2/5 overall and is the worst of the year so far in my opinion.