Caleb ‘The Storm’ Ragsdale: ‘I’m gonna put this ‘beast’ to the test’

Clarksville, Tennessee’s Caleb “The Storm” Ragsdale will look to keep his unbeaten record in tact when he takes on Chaz Jourdan at Johnathan Ivey’s Cage Fighting Championships 2 on Aug. 19 at the Mid-TN Expo in Murfreesboro, Tenn. Pro MMA Now caught up with the Harris Holt MMA product to get his thoughts on his opponent and find out more about what makes “The Storm” tick.

Thanks for talking with us Caleb, how did you get the nickname “The Storm”?

Ever since I was a kid I was fascinated with storms. My motto is “Storm Comin” you will hear everyone screaming that when I walk out to the cage, so hell, I decided to run with it.

How much do you know about your opponent Chaz Jourdan and what are your thoughts on him?

I actually don’t know much about him at all and that’s exciting to me. I’ve heard he’s a beast. I’ve heard he’s going to knock me out and all this mess. I love it and I’m gonna put this “beast” to the test.

Where do you train and who are some of the guys helping you prepare for this fight?

I train out of Harris Holt MMA in Clarksville. My brother Dylan and Jacob Kilburn are a couple of the guys helping me get ready.

How do you see the fight playing out?

Every fight I’ve had I win in either one or two ways, I finish them in the first round because they are too worried about offense, or I push them into the later rounds and test their will. I haven’t had a long fight in a while and I hope he doesn’t give me an easy opening and we can put on a show for the fans.

Man I’ve always seen the world through a different eye. When I walk into a room I size up everyone. I put myself in mental situations figuring out how I would beat any individual in the room. I know that seems like a crappy way to live but it’s just who I am. I’m a nice guy and I hate fighting, trust me it’s a fire that I don’t enjoy being in. But with that mentality, I grew up and realized the truth in fighting. Like people worship basketball “players”, football “players”, etc. they get so deep into being a fan and they can’t relate to it at all. A fighter isn’t a “player”. Listen to me fighting is the anchor of humanity. If someone tries to rob you are you going to throw a football at them? If someone tries to kidnap your child are you going to play them in one on one basketball? Exactly, that is why I got into fighting. The climax of every confrontation is without a doubt combat and that is why I got into fighting. I don’t do it for the shows I do it so I know I am capable of defending myself and my loved ones. The fights in the cage are just practice for the real deal.

My goal is to just practice and learn as much as I can. I want to inspire people along the way. I work, I am trying to settle down, have a family and all that but I still find the time to train and chase an art that I love. I would like to transition this into maybe a motivational speaking gig one day or possibly referee some.

Johnathan Ivey tells me you plan to move down to the middleweight division in the future, what’s your thinking on that?

Yeah I used to fight at middleweight in my younger days. That weight is certainly doable and I know I’ll be a force at that weight given my height and strength. After this fight I’ll focus on losing a little more weight so the cut isn’t so bad to get there.

Life for me is pretty boring to be honest. I work evenings, I leave work around midnight and go to my gym where I workout. When I’m training for fighting I usually can only do that in the morning and weekends. I have the love a beautiful woman, her name is Rachael, she’s my girl. I don’t go out much unless I’m celebrating something important. I’m a family man and I like being with them or being alone with my thoughts. So nothing too exciting. I do like to turkey hunt but that’s not in season right now haha.

Thanks for your time, any final words for the fans?

Fans make the fight special and the more there are the more fun it is. We are gonna put on a show that y’all don’t want to miss my teammates are some killers and it’s gonna be a fun night! 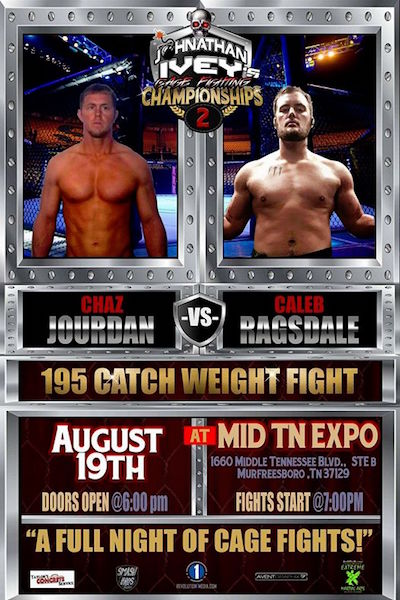