Tyler ‘Nyquil’ Edwards: ‘I see him going to sleep’

Seasoned fighter Tyler “Nyquil” Edwards will make his bantamweight debut on Aug. 19 when he faces rising talent Nick Phillips at Johnathan Ivey’s Cage Fighting Championships 2 at the Mid TN Expo in Murfreesboro, Tenn. Pro MMA Now caught up with “Nyquil” to get his thoughts on the matchup and learn more about the Guardian MMA product who likes to put his opponents to sleep.

Thanks for talking with us Tyler, how did you get the nickname “Nyquil”?

I got the nickname from putting a couple opponents to sleep, it’s like I hit the snooze button and they are knocked out just like when NyQuil hits you.

How much do you know about your upcoming opponent Nick Phillips and what are your thoughts on him?

I’ve seen some of him and I’m looking forward to a good fight. I think he is a tough young kid and looks to be a good one to put on my record.

Where are you training for this fight and who is helping you prepare?

I train at Guardian MMA in Lebanon, Tenn. I train under Warren Grace. Monty Burks and Darren Reed are just a couple of the people helping me in camp.

How do you see the fight playing out when you visualize it?

I see him going to sleep. I’d like a first round knockout but I’ll take it when it presents itself.

My best friend Simeon got me in there finally after about 7-8 years of asking I finally said screw it, trained for a month an got in there, 42 seconds later and I was hooked.

I will be a world champion.

When I win on the 19th it will be a good one to add to the record. For one, Johnathan Ivey is gonna put on a hell of a show and I don’t plan on disappointing anyone. My fight alone will be worth the money.

Life for me outside of fighting, well I do this on a daily basis. I work in a gym and head to the gym when I’m off work, so no partying for this guy.

Thanks for your time, any final words for the fans?

To the fans that like or don’t like me, don’t blink when that door locks it’s gonna be the highlight of the night. 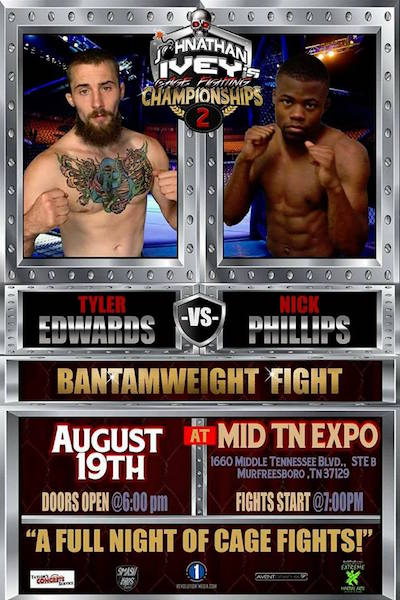