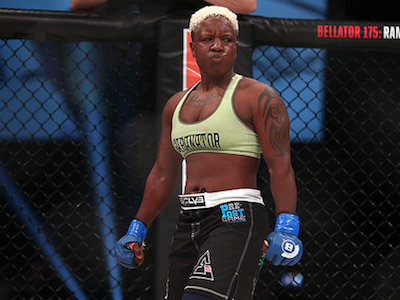 Gabrielle Holloway will return to the Bellator cage on August 25 to lock horns against former BJJ world champion Talita Nogueira. The explosive wrestler currently holds a record of 6-5, with her last fight being an upset win over rising hot contender and former BJJ world champion, Alexis Dufresne. The 27-year-old “Gabanator” will try to get into the title picture with a win over the currently undefeated Nogueira. Ahead of arguably her career’s most important fight, Holloway took some time to answer a few questions about her personal life and more.

When you look behind and realize that this is how far you have come, how does it feel? What according to you is your greatest achievement?

It feels great especially since I’m involved in many other things and not just MMA. My ultimate goal is to be a world champion so I still have room to grow!!
My greatest achievement in MMA overall is going undefeated as an amateur and as a pro never getting knocked out or submitted. Never getting knocked out or submitted means a lot to me because all my defeats have been by decision. I know for a fact in those fights I beat myself and that’s why none of those opponents will give me a rematch.

In most of your fights you are the underdog. What is your take on this? Does the fact that people underestimate you affect you at all?

When I’m training for a fight I don’t think about who is the underdog. To believe that you’re an underdog that would mean you believe that there is a chance you could lose or the odds are against you. I go into every fight with the mindset that I’m going to win no matter what. People underestimating me does not affect me one bit. It might affect their wallets if they bet against me though (laughs).

You currently hold a record of 6-5. Where do you think you stand in the current featherweight picture? Do you think you’ll be able to get a title shot with next win?

I don’t know where I stand overall in the featherweight division. I do know for Bellator I “Gabanated” the number contender when I supposedly was the “Underdog”. I know I will be getting a title shot when I keep dominating because there will be no choice.

You will be facing former BJJ world champion Talita Nogueira. She, just like you, is known for finishing her opponents. What are your thoughts on her? How do you see this fight going?

She’s just another opponent in the way of my title shot that’s it. I’m going to win this fight and that’s all that matters. 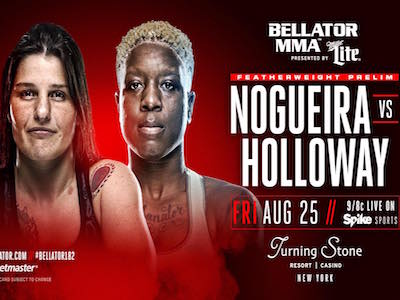 Former Invicta FC bantamweight champion Tonya Evinger will take on Cris Cyborg for the vacant UFC featherweight championship. What are your thoughts on the match?

It should be an interesting fight, I’m excited for both ladies. They have both been in the MMA game for a while and now it’s their time to shine.

You’re known for your love for animals. What got you involved with caring for animals? You have also stated that MMA isn’t a career for you and you plan on to become a Veterinarian. For how long do you plan on to continue MMA? What is your main goal as a MMA fighter?

All my life I’ve been around animals. I was literally born to help animals and wanted to become a vet before I could even say the word veterinarian. In 2003 my dog was shot in the head and killed on my front porch. I think I was around 13-years-old at the time and had decided a long time ago I wanted to be a vet. My dog getting killed just gave me that extra push and drive to really follow through with it and never give up. I plan on doing MMA for a long time and my main goal is to become a world champion.

Fighters have time and again commented that they have faced some form of racial discrimination. A notion which has come out is that some MMA promotions don’t treat fighters of color the same way they treat white fighters. What are your thoughts on this? Have you ever faced such problems? UFC welterweight champion, Tyron Woodley and former Invicta FC straw-weight champion Angela Hill have gone on record to talk about the problem. What are your thoughts on their statements?

It sucks and it’s not fair, no one should be discriminated against for any reason. I personally have not experienced that in my fighting career. I can’t comment on their statements because I have not read or heard them.

MMA is notoriously known for being a negative sport. Time and again athletes have quit the sport because of the draining negativity the sport has around it. Back when you started fighting women found it difficult to get recognition. How did you deal with the negativity? Did the backstage politics ever affect you?

When I started doing MMA I was not around or affected by any negativity. Being the only girl fighting out of my gym I got lots of recognition.

Thank God for keeping me and my opponents safe and healthy!! As always thank you to all my friends, family and fans for your support!! Thank you to Robert Green and Pre Post Game!! Thank you Master Mike Moses Evolve Academy and Dameron Kirby Team Randori!! Thank you to all my sponsors!! If you don’t know who the Gabanator is check me out at https://pre-postgame.com/holloway/.

Best Of Luck. Thank you for your time.

Thank you for the interview!!