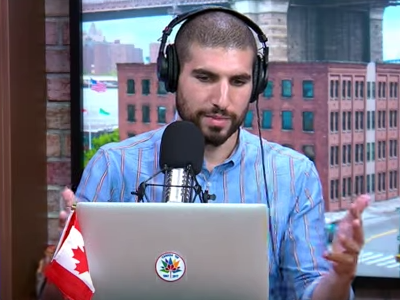 Award-winning MMA journalist Ariel Helwani of MMAFighting.com was originally supposed to be part of Showtime’s coverage of the Mayweather vs. McGregor World Tour press conference last week. It was a big deal for an MMA journalist to be a part of what is proving to be the biggest combat sports event ever seen. However, just hours before Helwani was set to take part in Showtime’s broadcast coverage at the Los Angeles leg of the tour, he was called aside and told UFC president Dana White had thrown a fit when he heard he was part of the coverage and demanded he be removed from his position. Not wanting to upset the money cart, Showtime obliged.

Here’s an excerpt from Helwani’s statement as told on Monday’s edition of The MMA Hour:

“I was going to work for Showtime. This was a big deal for me. It was a dream come true to not only work for a network like that, but also to be a part of the broadcast team as far as the world tour is concerned.”

“I was very excited, went to the airport, got on the flight, landed at like around 2 a.m. PT, didn’t have much sleep, but I was pumped. I was excited.”

“So, I wake up Tuesday morning. … And around an hour before I was going to leave, I was told by the producer, ‘Before you go to the arena, could you stop by our hotel, we just need to talk about something’.”

“I had a bad feeling about it all, but I was trying to think positive thoughts, and I was going to hope for the best.”

“Obviously this was gutting, this was very disappointing. I was totally bummed.”

“I did want to put it out there because I do believe when you’re dealing with someone like Dana White, you can not let them walk all over you and bully you and intimidate you. And you have to tell people what’s going on. Especially because I had already told them I was going to be a part of it.”

“As he [Dana White] continues to go lower and lower, literally taking jobs away from me, taking money from my family, taking food from my kids… he continues to go low, I’m going to keep going high. Because if I stoop to his level then I’m no longer what I want to be which is an unbiased and fair and balanced journalist. If I show any kind of bias, then I’m no longer that. And so I will continue to cover the UFC and Dana as I have always covered them, which is in my opinion, fair and equal and balanced. And when they do something great like the UFC 214 promo, I will tell you. I will be the first to tell you it’s a fantastic promo. … There’s no bias. And when they do something I think is wrong, like the Amanda Nunes situation or the Demetrious Johnson situation, or any other situation, I will happily talk about that as well, the good and the bad. I’m not going to stoop to his level.”

“He’s trying to make this personal. He’s the one who last year in the first interview after the banning talked about my children. Anytime Dana White does something, I never say, ‘What would your kids think about that?’ That is crossing a line. I would never do that to anyone who I cover. But again, he’s not being held to the same standards as me. I’m not going to allow him to get the best of me.”