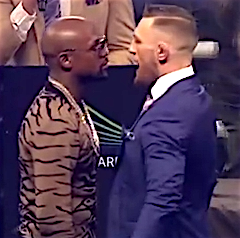 Take a look at the final stop on the Mayweather VS McGregor world press tour which took place Friday in London. First they stopped in LA, then Toronto, then Brooklyn, and ended the tour in London, and at each stop the two pugilists upped the ante, upped the trash talk, and gave the fans the spectacle they were hoping for. Conor McGregor took it to the next level in London, at one point physically touching Floyd Mayweather and patting him on the head. Floyd kept his cool though and luckily they’re saving the actual fisticuffs for the ring. However, “Money” Mayweather did throw plenty of verbal jabs on the mic and even hurled a homophobic slur at McGregor much to the chagrin to those like Fox Sports who were broadcasting the proceedings live and failed to bleep it. But alas, it is boxing and the fight game and none of this should surprise anyone. In the end, two men are going to get in a ring and try to batter the other unconscious and who said what at that time will be the least of their concerns. It is up to you the fans to support it or not by purchasing the pay-per-view.