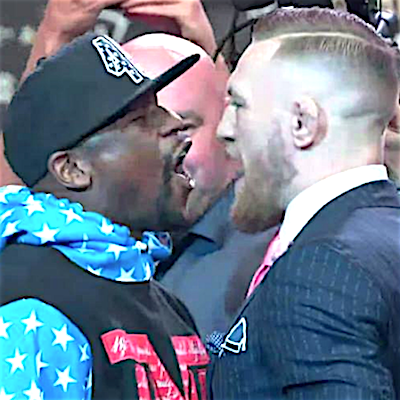 12 rounds of boxing. Fans will finally have the fight of the year.

Floyd Mayweather and Connor McGregor will indeed battle it out under boxing rules. The match that will be held at the T-Mobile Arena in Las Vegas on August 26 this year.

The match is finally official. Fighters will compete at 154 pounds with 10-ounce gloves in what could be the most lucrative fight in combat sports history. The match will be aired on Showtime’s pay-per-view.

Both fighters are giants in their field of fighting. With Mayweather unbeaten after 49 professional bouts and McGregor as the biggest name in UFC, the fight of the year has already started in social media wars.

On one corner, we have Floyd Mayweather Jr. who had already retired in 2015 with an unblemished boxing record. He was forced out of retirement by challenger McGregor for another fight that would may put his name in an all-time boxing record. If Mayweather wins, he will have more wins with zero losses than former heavyweight champion Rocky Marciano who, like Mayweather, retired with a perfect 49-0 career record.

On the other corner, we have Connor McGregor, the reigning UFC lightweight champion and former featherweight champion. McGregor is popular for his explosive knockouts in the octagon arena.

It was also made official that the fight will be presided under boxing regulations. Undeniably, it will be big challenge for the mixed martial arts fighter McGregor. Although it cannot be described as a completely foreign territory for McGregor, the MMA fighter will have to adjust his fighting technique to Mayweather’s territory. The latter is known as the greatest defensive boxers in history, making him known as a skilled technical boxer.

Under boxing regulations, McGregor will have to ditch his UFC gloves for a 10-ounce boxing standard. He also cannot kick or grapple with his opponent for a takedown.

Connor McGregor is a 28 year-old-Irishman and one of the most respected and exciting fighters in field of Mixed Martial Arts. According to Coach John Kavanaugh, McGregor is reportedly doing a huge amount of sparring in preparation for the fight. The Irishman posted photos of his training on his official Instagram account that teased fans about what he could do in the ring to Mayweather.

Other professional boxers do not consider the fight as a real match. Middleweight champion Grennady Golovkin said that it was a mere circus or a comedy show, that although Connor is a good fighter, he is still not a boxer.

For Mayweather, it will be his first time back in the ring after two years. He is seen in videos training and sparring as well. But gave very few details regarding the extent of his comeback training.

Despite the social media response for McGregor, few are actually expecting the UFC lightweight champion to beat Mayweather. Although McGregor is said to have quite a punch, he has been installed as a 5-1 underdog.

Mayweather Vs. McGregor betting odds are continuously changing. Mayweather opened as an obvious favourite at -2250 while McGregor was at +950. However, it should be noted that on the day the fight was made official, Mayweather’s odds dropped to -800 and McGregor came back up at +500.

The odds are hardly consistent as both fighters tease fans with their preparations and exchange trade insults with each other through the media.

Boxing pundits earlier analysed that Mayweather is a sure win. And it was considered a fair assessment especially if you take into consideration that Connor McGregor has no boxing experience at a professional level.

Bet on McGregor and cash out if his being younger and bigger, as well as his stamina, accuracy and punching power is what you are betting on. Many expect Connor to be fitter and tidier than Mayweather, throwing shots after shots in the style of a high-level fighter. You can also consider the fact that Mayweather hasn’t fought since September 2015. The 40-year old professional boxer was in retirement when he was called out for another fight.

But we also cannot discredit the fact that Mayweather has 20 years of experience in professional boxing and title fights against gigantic names in the boxing industry. Mayweather, should he decide to work on it, can find a perfect sweet spot and timing to hit Connor where the MMA fighter hasn’t experienced before.

As far as technical knockouts are concerned, many will want to see what happens if McGregor catches Floyd with a left hook, but it may not rock Mayweather enough for a KO. This means TKO/KO win is more probable for Mayweather and it seems to be a sensible betting option to take.

Seeing Mayweather finally lose would be unexpected, but possible. But for the fight to be another stoppage win for Mayweather is also very likely. Place your bets now for the most talked about fight of the year.