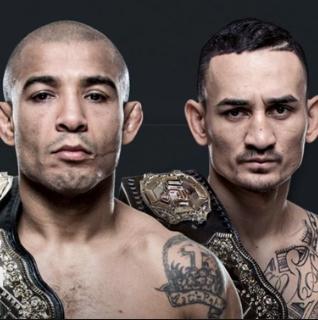 Can Aldo reclaim his former glory before his 2015 title loss to McGregor? He was on a 10-year unbeaten streak prior to that and had been the ONLY UFC featherweight champion up until that point. Or will there be an official changing of the guard as “Blessed” looks for his eleventh straight win against the Brazilian? Aldo has 14 knockout wins to his credit, while Holloway has seven. Both fighters have two wins via submission on their resume.

At 30-years of age, Aldo is five years older than Holloway. And while Holloway has never been knocked out, Aldo was stopped by McGregor in just 13 seconds about a year-and-a-half ago. And while Aldo appeared to have put the loss behind him against Edgar, the stoppage still has to be in the back of his mind somewhere.

Oddsmakers currently have Aldo a slight favorite at -135, with Holloway being the underdog at +115. Considering Aldo’s resume, it’s no wonder he’s the favorite, but momentum is a real thing and Holloway has plenty of it right now. They are also fighting in Brazil which should be taken into account, especially if it goes the distance.

Former women’s strawweight title challengers Claudia Gadelha (14-2) and Karolina Kowalkiewicz (10-1) square-off in the UFC 212 co-main event. Oddsmakers have Gadelha a hefty favorite at -330, with Kowalkiewicz coming in at +270. The only losses on both ladies’ records have been to current UFC strawweight champ Joanna Jędrzejczyk. Claudia dropped a decision to her last July (and in a non-title bout in 2014) and Karolina lost a decision to her this past November.

Longtime octagon veterans Vitor Belfort (25-13, 1 NC) and Nate Marquardt (35-17-2) will also be part of the UFC 212 pay-per-view card as the two middleweights fight for relevance in the division. Despite being knocked out in his last three fights (last one was overturned but he was still TKO’d), Belfort is considered the favorite in this one at -160, while Marquardt comes in as a live dog at +140. Both fighters can end anyone’s night with their heavy hands, but Marquardt, with 16 wins via submission to his credit, has a clear advantage if the fight goes to the ground.