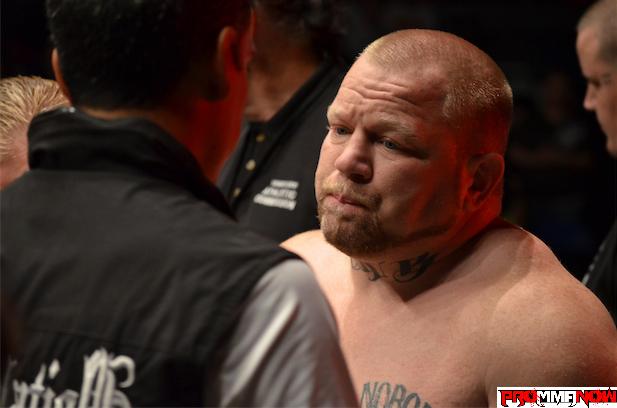 If you’re a UFC fanboy or MMA newcomer, the name “Big John” Ivey might not ring any bells. But if you’ve been around the sport for any length of time, chances are you’ve at one point or other seen the Tennessee “Leglock Monster” slap on a few kneebars or heel hooks and keep the crowd entertained with his pro wrestling style antics in the ring. Having been fighting professionally since 1998, and still going strong, if you’ve ever seen “Big John” fight live, it’s doubtful you’ve ever forgotten it.

“Big John” might not get the respect some of his peers get due to his record (41-56), but as someone who has been competing professionally for 20 years, and in 2003 alone fought 26 times, there are going to be some losses. “Big John” explained to Pro MMA Now his fighting philosophy and why, win or lose, you’ll always see him having a good time in the ring.

“Fighting professionally was never my dream,” Ivey stated. “It just kinda fell in my lap one day. I grew up in severe poverty where any money that came in was from illegal activity. When I found out there was a way for a guy like me to make a honest living, I was too happy to ever be upset or not have a good time at what I was doing. I have fought ALOT of fights in my career, most with limited notice and with the deck stacked against me and I never complained. I was making an honest living that was enough for me. From where I come from I’m a success.”

And if you’re wondering what could possibly motivate a man to fight 26 pro MMA fights in one year, “Big John” had a quite understandable answer for such a behemoth undertaking.

“That’s the year I found out I was going to be a father,” Ivey explained. “I’ve never met my dad and I had no idea how to be a dad, but I knew it was going to take money. I was scared to death so I started fighting a lot, every other weekend I was flying to a different state fighting whoever the hometown hero was… I’ve had my daughter on my own since she was 6-months-old, she is now 13-years-old so it all turned out okay.”

Fighting is about overcoming adversity, overcoming the odds and ultimately overcoming one’s Self. And Ivey is nothing if not a fighter. He’s been fighting a long time, making a living, providing for his family and traveling the world doing what he enjoys and obviously was born to do. And for that we salute you “Big John” Ivey! Now check out this highlight reel of “The Leglock Monster” in action!