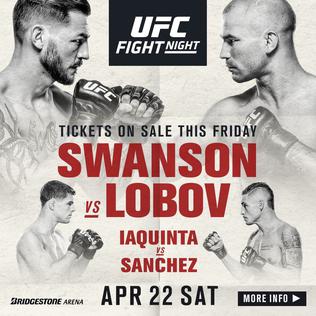 Weigh-in results are in from Nashville as fighters competing at Saturday’s UFC Fight Night 108 card at Bridgestone Arena are now officially ready to go. Only light heavyweight Marcos Rogerio De Lima came in heavy, stepping on the scales at 210 pounds, 4 pounds over the 206-pound non-title fight limit. Thirty-percent of his purse will go to his opponent, Ovince Saint Preux, who weighed in at 206.

Cutting weight for De Lima must have been like trying to get water out of a dry waterproof bag. What’s interesting is this is the second fight in a row where Marcos Rogerio De Lima has missed weight. He came in at 209.6 pounds in January when he fought Jeremy Kimball and knocked him out in the first round at UFC on Fox 23. He may need to be fighting at heavyweight.

A five-round featherweight bout between Cub Swanson and Artem Lobov headlines the UFC Fight Night 108 card, while a lightweight clash between Al Iaquinta and Diego Sanchez will serve as co-headliner.

*Missed weight for fight with Ovince Saint Preux. Came in at 210 pounds for the light heavyweight fight. Fight will proceed as scheduled. De Lima will be fined 30% of his purse due to this being his second consecutive miss. Money goes to OSP.