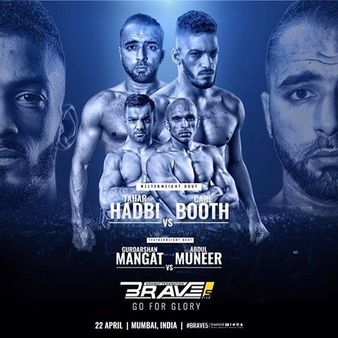 Brave Combat Federation stands as one of the biggest and the most credible promotions in all of Asia. The Bahrain based promotion, with its fifth event, will try to do what most global promotions haven’t done, that is try to launch themselves into the Indian market. They will try to do so by holding, arguably, the first ever “truly-global” MMA event in India.

The promotion has always been keen on launching themselves in the Indian market. After all, India is the world’s largest democracy with 65% of the population being below the age of 35. Hence, if presented properly, India can turn into a huge market for MMA which would not only be an important move for the sport, given the population of the country, but will also generate job opportunities for thousands. Here is a breakdown of the event and the impact it will have on the MMA scene in India.

Event:
Brave 5 is going to take place at the National Sports Club, in the-commercial-capital of India, Mumbai. Holding the event there is a wise move as it is arguably the only place in India which has a concentrated MMA fan base.

The undercard is stacked with local as well as global MMA prospects. The main card will be opened by decorated amateur English fighter Hardeep Rai as he takes on Arnan Chaiyasan. Both will be making their professional debut. The card will also see the return of decorated Indian MMA star and former SFL featherweight champion Bharat Kandare, who returns from the UFC development program. Other local stars like Nelson Paes, Chaitanya Gavali and Mohd Farhad Rafiq too will be a part of the event.

Impact:
This is beyond doubt the biggest and the most exciting MMA event to go down in India. It is for the first time that almost every big name in Indian MMA will come together to fight on one platform. Not only that but the event will also see many global MMA prospects lock horns, which might end up being some of the best matches Indian MMA fans have ever seen.

The event is filled with exciting matches from start to end and to add a golden touch the event is free. Yup, entrance to the event will be absolutely free for everyone. This is a move by the promotion to get people involved into the sport. For most fighters competing in such an event can end up as a life changing opportunity. The reason being the gravity of the stage. Brave is a very popular promotion not only in Asia but across the globe. Hardcore MMA fans from across the world tune into to watch Brave events. Many fighters competing on the card have little or no exposure to the MMA world. The fighters are almost unknown and hence if they could manage an eye catching performance at the event, they will certainly gain a lot of attention. Brave 5 is beyond doubt going to be a landmark event for Indian MMA.

The event goes down in the National Sports Club, Mumbai on 23rd April, Sunday. The event starts around 6:00pm Indian time. Stay tuned for our exclusive coverage here at www.prommanow.com and follow me on Twitter @PandePaarth.