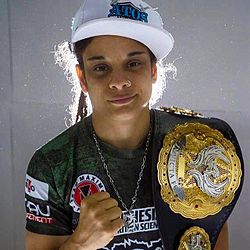 Former Invicta FC strawweight champ Livia Renata Souza (10-1) is coming off a first-round TKO win over Ayaka Hamasaki (14-2) last month at Invicta FC 22. It was “Livinha’s” first fight since losing her 115-pound belt to Angela Hill (6-3) via split decision in May 2016. The loss to Hill marked the first defeat in Souza’s pro career which began in 2013. Pro MMA Now caught up with the Brazilian submission ace to find out what’s going on.

What got you into MMA and what is your combat sport background?

In the gym that I trained I already had Muay Thai classes, so with BJJ my principal weapon, and learning how do stand up moves with Muay Thai, and the experience of judo since 7 years, I already had a good base to begin to build a solid career. I think BJJ, Judo and wrestling.

A lot of people don’t believe on my choice but I don’t care because I know that it’s a lonely profession. The big challenge was a great first fight in U.S. against former champ Katja Kankaanpaa she is very strong and very skilled grappler.

You suffered your first professional loss in May 2016 against Angela Hill. How did it affect you? Does being undefeated boost your confidence or adds more pressure?

Make me pissed off because this fight was a big mistake of judges and the result was not fair. I never feel under pressure because I’m very confident with my skills and my strategy to finish the fights.

You returned after 10 months to the octagon. Why did you take such a long break? Did this break affect your performance in the fight?

I dunno too haha. I’m have a long training camp and improve my skills and correct my mistakes with specific repetitions, with rage we can do much better the violent work.

You knocked out Ayaka Hamsaki in the very first round of your encounter on Invicta FC 22. Did you plan to finish her? Are you satisfied with your performance? Thoughts on Hamasaki as a fighter.

Sure, I’m always looking to submit, choke or KO. No because to make some great things I need fight so much better and fast and I will back to gym and improve step by step my game. Ayaka is a great champion, a Japanese female MMA legend pioneer. Also very strong, very fast with a great number of wins against great fighters, a big respect for her.

What do you think is next for you? Do you think this win will assure you a shot at the Invicta FC strawweight title? Kaline Medeiros called you out to fight for the title. Do you plan on to face her?

I´m waiting on a big fight because I do not hurt and ready in a few weeks to make a great show again. I deserved the rematch with Hill but the organization doesn’t attend being that everyone knew that it was the most just thing to do. HAHA of corse not, she lost every round to Hill in a unanimous decision and she needs more wins to deserve this shot again. I look to great and significant fights, with great champions.

You have finished almost all your opponents, a feat which is very rare in the strawweight division. What is your game plan and emotional state as you enter the fight? Why do you think most fights in the straw-weight division goes to the judges?

Start the fight studying your opponent, quickly respond and keep pushing forward. I don´t know, you tell me hahaha.

Many know you by the name “Livinha”. What is the story behind it?

Because sounds like a lil Livia like a child baby face because I’m not too taller hahaha.

What are your thoughts on the current straw-weight world champion Joanna Jedrzejczyk?

No words to describe her because she as the second best fighter on earth pound-for-pound, because the first is Cris Cyborg and in third place is Amanda Nunes. Joanna have a great talent and a big heart, I like a lot her fights.

You have been an impressive contender, do you expect a UFC call soon? Whom would you like to face in your first fight?

Thats a hard profession with a lot of points to be discussed. This sport and risk with the entertainment potential make me think about it and the athletes deserve more than we have now.

It’s not easy but the glory is forever.

Thanks always from support me and my Brazilian fighter friends, and all from my ghetto Jardim Universal, Araraquara Brasil tiu!