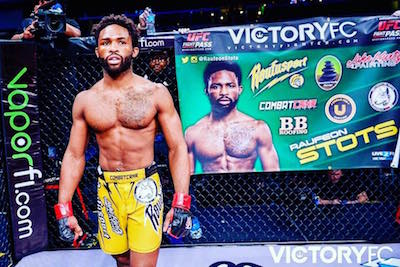 Undefeated Roufusport talent “Supa” Raufeon Stots (7-0) will return to the Victory FC cage on April 14 when he challenges UFC veteran Rob Emerson (19-11) for his bantamweight title at VFC 56 live on UFC Fight Pass. We heard Rob’s thoughts on the fight yesterday, and now Pro MMA Now talks with Raufeon about the matchup and what this win would mean for him.

You got a tough fight coming up against a seasoned vet that holds two Victory FC belts. What would a win over Rob Emerson mean to you, would that be your biggest win?

A win over Rob Emerson would be another step in this journey of becoming this best in the world. This would be my biggest win but every win since I started was my biggest win because I get better and prove I deserve the toughest fights every time I fight. Rob is feeling himself because he beat two injured opponents for two belts after dropping a fight. Now he claims to be “in his prime” haha. It will be great bring the old fella back to reality.

Do you respect what he’s done in the sport?

Honestly, he’s done a great deal in this sport. He has had some great brawls, fought some of the best in the world, and had a semi successful career. However that’s in the past and despite how much he tries to psych himself out he’s past his prime.

Were you into MMA when he was on The Ultimate Fighter 5?

Nope I was graduating high school haha. I had not paid much attention to the MMA back then.

How do you see yourself winning this fight with Emerson?

I see my self finishing him by KO or Sub before championship rounds.

Where do you have the advantage?

I am younger, faster, stronger, better looking and better everywhere ….. Should I go on?

How did it feel to get a win over veteran Jeff Curran?

It felt good. I was able to handle a veteran fighter relatively easy and it just goes to show that I rise above my level of competition every time I compete.

How did you get into the sport?

Jens Pulver got me to help with wrestling at a gym he was starting in Kearney, Nebraska. Eventually he got me to take a fight.

How did you end up at Roufusport?

Pat Miletich actually suggested I come to Roufusport after training at MFS for a year. He said if I wanted to get to the next level he trusted one coach to take me there, Duke Roufus.

What coaches and training partners are helping you most for this fight?

Within the year I would like to be competing in the UFC, within 5 I will have the UFC Batamweight Belt.