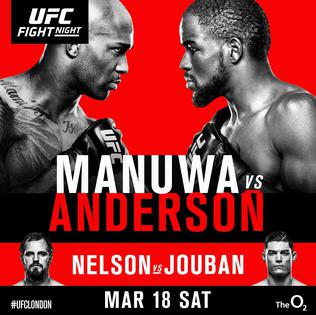 Jimi Manuwa stopped fellow light heavyweight Corey Anderson with a single lead left hook in their UFC Fight Night 107 main event Saturday in London. Official time 3:05 of the first round. In the welterweight co-main event, Gunnar Nelson looked superb as he put Alan Jouban down with strikes then submitted him 46-seconds into round number 2. The event also the final fight of England’s own Brad Pickett, who retired following a TKO loss to Marlon Vera in round 3.

And that's that!!!! Jimi Manuwa finishes Corey Anderson via KO in RD1 at #UFCLondon @POSTERBOYJM pic.twitter.com/mLZb7rIpvC