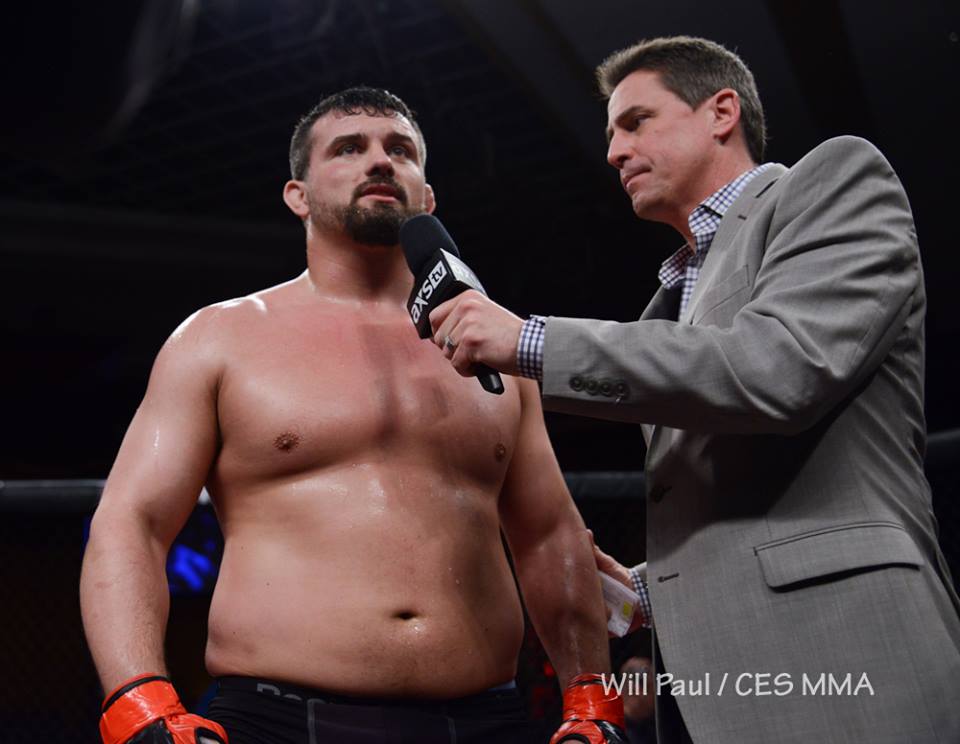 Before Pat “The Beast of the East” Walsh looks to win his sixth straight against Dirlei Broenstrup at CES 42 on March 31 in Lincoln, R.I., LIVE on AXS TV, the UFC vet and former The Ohio State wrestler sat down with ProMMANow.com.

Why have you been so successful since parting with the UFC?

I just happen to love to fight. I haven’t been caring so much for training but it’s just the fact that I enjoy fighting, so I haven’t had to worry much. There are guys who get so stuck in their own head about how much these fights mean, I just accepted that there’s no one that’s not in the UFC that’s going to beat me so I just go up. That’s why I’ve been getting these quick finishes. I’m not so worried and spending that extra time hesitating and worrying. I’m just out there, having fun.

How much happier are you to be fighting at cruiserweight or heavyweight?

One thousand-times happier. I walk around with a smile instead of walking around, looking like it’s the Holocaust. It’s the fact that I’m not focusing on cutting weight or making a weight class; that allows me to focus on my daily tasks and being successful in my life, not just in MMA. When I’m training, I’m focusing on how much better I’m going to get, not on how much I’m going to weigh after this workout.

Do you ever sit back and think about how crazy it is that you were at one point a middleweight?

Yeah. I’m eating some buffalo chicken right now and can’t imagine that I was under 200 pounds. I’m in the low 240s right now and I’m watching my weight. I was able to shrink my body but it was just counterproductive to my success. I’m actually slower at 185 than I am at 250 because I’m so stressed in that state. If I’m closer to my natural weight, I may have to lose fifteen or so pounds, that’s doable, it’s fine, but it doesn’t affect my success. I’m actually looking to throw away cruiserweight and just fight heavy after this. I’m looking to put on some muscle and bang with some big guys.

What should fans expect on fight night?

I‘m going to throw hands. If he wants to take a shot on me, I’ll submit him or I’ll beat him on the ground. But like the last few fights, I’ve had a lot of opponents make a takedown attempt on me where I’m the wrestler. If you look at the last three fights. I think Kevin Haley did body locks so I threw him and in the second round I was all about standup so he shot me and that’s where I had my submission. I’m not worried about taking these guys down. I’m looking to throw hands. We’ll let the other guy dictate where he wants to fight.

What will this win mean for your career?

It means I need titles or the UFC should be knocking. It really proves what I deserve. I’ve always known I deserve the bigger fights, the bigger names, but now there is just no question: I have the record, I have the wins, and I have the talent. It’s just another win proving I deserve the CES title or a shot at the big show.

If Dana White is reading, do you have any words?

Bring it on. Especially at heavyweight. Right now I’m down at cruiserweight but the heavyweight division in the UFC is just not that good right now. I’m looking at these guys, watching these fights, I know I am going to beat these guys. I’m going to break the top ten. If my first UFC fight is against a top ten ranked heavyweight, then I’m saying, yes. Because they’re just not that successful. I think Corey Anderson has a main event fight coming up on Fight Card and he just barely beat me in a decision. Dan Kelly just beat Rashad Evans, a former world champion, that was my last loss, now a main card in the UFC. My losses – Kelly was a bad cut, I beat him up in the first round and lost in the decision, that was because I ran out of gas in a weight class I shouldn’t have been at. Anderson is a main event in UFC Fight Card. Those are the people I’ve competed against and they are having success. Now that I’m the best Pat Walsh I’ve ever been, I’m ready. I’m ready to go.