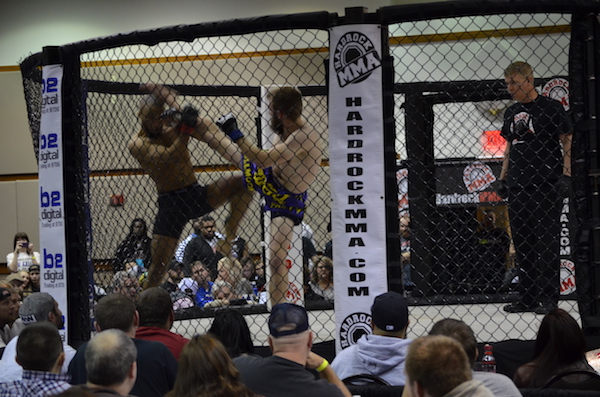 CLARKSVILLE, Tenn. — Rising local featherweight mixed martial arts talent Jacob “The Killer” Kilburn goes to 2-0 in his professional career after a hard fought win over Bronx Hill MMA’s Elliot Blair Saturday night at Hardrock MMA 87 in Bowling Green. Kilburn faced opposition in round one and had his back taken. The flashy Harris Holt Martial Arts instructor and Daniel Bryan look-alike showed effective kicking and solid hands before slipping to the mat on a jump spinning kick. Blair took advantage of the fall and held Kilburn’s back for the second half of round 1. He was unable to get the choke finish he was looking for though, despite having one of Kilburn’s arms trapped in a body triangle for a time.

Round 2 saw Kilburn show off his technical striking. He ate a couple good shots from Blair, showed a good chin and kept picking at Blair, finally catching him in a guillotine up against the cage. Kilburn brought him to the ground with it and got the tapout finish at 1:52 of round number 2.

The 21-year-old karate specialist showed he’s also quite capable in the grappling department, not just with the finish, but also with the defense he showed in round 1 after having his back taken for well over 2 minutes. Rumor has it Kilburn’s turnaround is likely going to be quick and local MMA fans will get the chance to see the Clarksville talent once again up close before the inevitable day comes, where if he keeps on winning, he is picked up by one of the major promotions.

Kilburn posted on his Facebook page following the fight:

“So I went out and got another professional victory and finish this weekend. I am keeping my undefeated record and I’m happy about that for sure. BUT the big deal about this past weekend is I was able to finally put a big mental hurdle to rest. I beat a man who was the Hook N Shoot champion in the amateurs and who I was matched up with in the past but the fight always fell through. The Hook N Shoot title is the only goal and title that eluded me in my amateur career and it was 100% due to circumstances out of my control, so by beating Elliot Blair, in my mind I finally became the Hook N Shoot champion. I lost sleep about it and thought about it often, because I am a goals oriented person AND I DON’T STOP UNTIL I ACHIEVE MY GOALS! So Saturday night I checked the last thing off my “must do” list other than being successful in the UFC. I can now start with a clean slate and mind and get focused solely on the road to the UFC.”

Knockout of the Night went to heavyweight Justin Burgun for making Hardrock MMA history and stopping Johnathan Fugate in just 6 seconds with a single punch. Fugate, who looked more like a super heavyweight, went down hard and was out for several moments before he was able to leave the cage on his own accord. Be on the lookout for that video clip in the full event video below. Also, in further undercard action, Brandon Campbell defeated Justin Thompson for the amateur bantamweight championship and Derek Smith submitted Jacob Warf for the ammy light heavyweight belt.