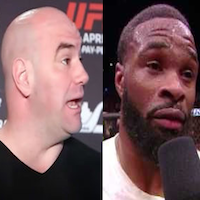 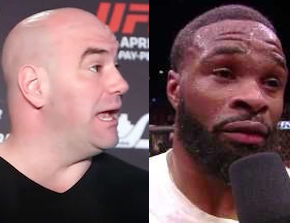 The ongoing beef between welterweight champ Tyron Woodley and UFC President Dana White continues to heat up. Woodley has been vocal about his feelings of not getting the respect he deserves as champion and following his narrow decision win over Stephen “Wonderboy” Thompson at UFC 209 over the weekend, all indications are that things are not going to get any better on that front any time soon.

Woodley got word of White saying he thought Thompson won the fight and was not pleased. Here’s what he told TMZ Sports:

“Dana White thought I won the first fight but he didn’t publicly come out and say he thought I won the first fight, so I thought it was a bit distasteful for the promoter to say he thought [Thompson] won the fight. That’s like me coming out and saying as a fighter that I don’t think he didn’t do a good job of promoting the fight. Which I don’t. I don’t think they’ve done a good job of promoting me as champion.”

White responded by reminding Woodley of how the fans were booing his most recent performance and then told the champ he needs to move on and remember who is calling the shots:

“Tyron Woodley came out and said he was going to destroy Thompson and there would be no question he was the champ. Well guess what? There’s questions again.”

“Let me tell you what … when you have a performance like you did at 209 and you get booed for 5 straight rounds and then people are booing so loud you can’t even do your interview, you should probably just take your lumps and move on. Get your next fight as fast as you can and try to put that performance behind you.”

White added one last thing … “There’s one guy around here who calls the shots and as soon as you learn that, the better off you’ll be.”

Yikes. Woodley isn’t one to bite his tongue much and promises he’s going to be hard for them to deal with. Stay tuned.