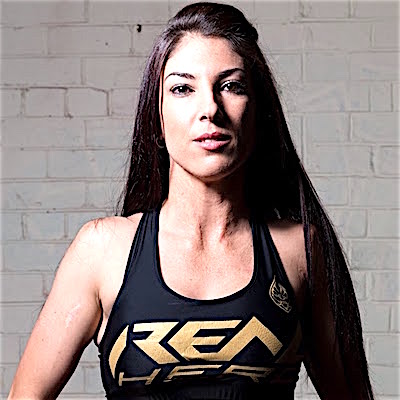 South African featherweight Yolanda Schmidt is one of the most popular female Muay Thai fighters today. Yolanda has been competing since 2013 and during that time she has captured many regional as well as global championships. “Springbok” took some time off and answered a few questions about her life and opened up on her future plans.

What got you into Muay Thai?

I started to add an extra fitness component to my full time dance studies and competitions. I trained twice a week for a almost a year and then decided to train 5 days a week and try out the fighting scene. I’ve not looked back since.

The fighters around me at the time inspired me to try fighting. My trainer, Andrew Parnham, showed a lot of belief in me which helped me believe in myself and my ability.

I first stepped into Boxercise group Fitness classes at the local weight gym. I then moved to a kickboxing and MMA gym where I did kickboxing, MMA and Brazilian Jiu Jitsu, until my trainer tore my shoulder performing a Kimura sweep on me. I was told by specialists that my career was over before it had started. I ignored them and with my determination, rehabbed the shoulder and found a Muay Thai gym so as to do stand-up only. I didn’t want to risk having my shoulder torn in ground work again.

Being female in its own is a challenge in this sport. Our genetic make-up can cause more challenges than we would like. Our hormones make weight cut and other aspects of training a little more tricky. Dealing with injuries during fight prep can be very spirit dampening and it is about working around those injuries. Finding the energy to work all day and then give 150 percent at training every night has its ups and downs. Then the financial aspect to cover all expenses can also have an impact, it is very hard to gain monetary sponsors. Every fighter will have their own set of challenges, some shared with me and some entirely different, yet none the less difficult.

Who is your toughest opponent till date?

This is a hard one to answer as I could put two in that category. Katia Semail from France had impeccable timing stopping almost anything I attempted to throw. I fought her with one eye, the velcro from the elbow pad (this was at IFMA world championships 2015) scratched the inside my eye in the first round. However, even with two working eyes she was very very skilled and went on to take the Gold Medal that year (I took the Bronze medal). plyfah Sor Nittaya of Burriram, Thailand kicks harder and quicker than anyone I’ve ever faced. We have fought twice, once in Bangkok and once in Hua Hin, leaving us with a 1:1 record.

My fight name is ‘Springbok’, I’m South African born and this is our national animal. My trainer, Andrew Parnham, gave it to me. This animal is also known for its speed and agility, and that part of my fight game is something I’m always working on. I’m proud to be South African. Smiling assassin was given to me by a commentator on one of my fights. I smile a lot on the ring. However this is already someone’s fight name, so it’s not technically my fight name yet many call me this. While in Thailand, Santai Muaythai gave me a Thai fight name. It is ตาหวาน, pronounced ‘Dtawaan’ and, directly translated, it means sweet eyes.

MMA has gone on to become a popular combat sport. Do you pan to switch on to it? If you would then in which weight class do you plan to fight?

No, I don’t plan to switch. The specialists have warned me that I can end my career completely, if I tear my shoulder again. As is, it’s a constant struggle with it. So while MMA definitely has a wider audience, fans will unfortunately not see me in the octagon. However, if by some miracle it did happen it would be 118-119 pounds.

What is your message to everyone who wants to take combat sports as a career?

Any sporting career takes dedication, passion and toughness. If you don’t possess those qualities, then step away now. Be prepared to give it your all or nothing at all. Half an effort will simply be wasting your own time. Anything is achievable by anyone, whether you think you can or think you can’t, you’re right! You get out what you put in, and hard work is not what is seen when the trainers are watching but what is done when they are not watching.
One of the best decisions I’ve made was to become a professional fighter. It teaches so much more than just physical skills.