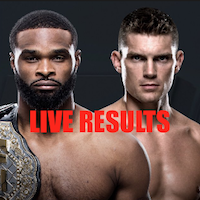 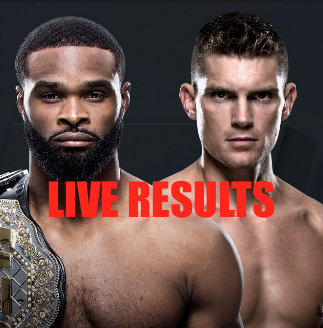 Tyron Woodley defends his welterweight title in a rematch against Stephen “Wonderboy” Thompson. They fought to a draw in their first fight, now Woodley will have the chance to prove once and for all he’s the undisputed 170-pound champ. Rashad Evans returns against Daniel Kelly and Mark Hunt battles Alistair Overeem.

Here’s how you can watch the UFC 209 live stream online.

Round 3 – Nice left counter hook from Soukhamthath. Jab from Morales but takes a right upstairs and then three nice left hooks to the body. He’s hurt but trying to hide it. He takes a knee to the body and a few more left hooks to the body, working that liver. Very nice. Soukhamthath goes for the takedown but gets caught on bottom with Morales riding his back and landing shots. Morales looking for the choke. Soukhamthath’s nose is busted up and bleeding pretty good as Morales searches for the choke. 2 minutes to go. Soukhamthath is out of immediate danger but Morales still on his back with a body triangle locked on. Morales continues to soften him up with punches with 30 seconds to go. Soukhamthath throwing blind punches and landing some as the round counts down. Interesting round right there on how they will score it. Soukhamthath did great early in the round and was close to taking Morales out. Could potentially be a draw.

Round 1 – Craig’s nickname is “The Bear Jew”. He won’t divulge how he got that name. Couple high kicks from Craig. More high kicks, then a body kick. Takes a knee to the body from Pedro as the clinch up against the cage. Craig gets a takedown from the clinch but Pedro is right back up pressing Craig to the cage. Uppercut from Craig. Couple knees from Pedro to the face as Craig returns with some uppercuts, lands a good one that backs Pedro up. Pedro fires back with a straight right that drops Craig. He lets him up. Low kick from Craig but he pays for it with a counter punch and a knee to the face. Pedro with the takedown to side mount and drops some elbows. Gets the crucifix then pounds Craig with elbows to the dome until the ref steps in.

Round 1 – Left hand and takedown from Iuri as he looks for an arm but Luke instantly defends perfectly and is back up. Ref lets Iuri up. Overhand left clips Luke. Low kick inside from Iuri. Couple nice lefts from Luke. Good movement from Luke avoiding the longer reach of Iuri. He catches a kick and dumps Iuri. Luke landing big hammerfists as Iuri turtles up. Blood dripping from Iuri’s face now onto the mat. Lots of punishment from Luke to the side of the head and the ref is warning him to do something. His face is a bloody mess. 1:15 left to go. Elbows from Luke now as he presses him to the cage. Luke lands an illegal knee and he gets time to recover now. They take one point from Luke. Low kick from Iuri. He lands a left on Luke that knocks him back before the bell. (would have been a 10-8 round for Sanders before point deduction)

Round 2 – Clinch from Luke, Alcantara prevents the takedown, lands a left on the break. Another left from Iuri. Nice right from Luke.Inside low kick from Iuri. Luke hurts him with a couple punches and Iuri pulls guard. He attacks a leg but Luke gets free to his feet. Right from Luke, Iuri is hurt and goes down briefly as he absorbs more punishment. Iuri turtles up again as Luke starts landing punches to the side of the head. Iuri rolls on a deep leg lock and is able to secure it and gets the tapout. Damn, helluva fight and Iuri snatched that win from the jaws of defeat as Rogan so aptly stated. Great effort from both guys. Iuri hands Luke his first loss.

Round 1 – They engage early, both landing shots, Bektic with a nice right, then a quick takedown. Bektic dropping nice elbows from side mount and he opens up Elkins and he’s bleeding quickly. Bektic continues the assault with punches from half guard. He gets the crucifix position and drops more punches and elbows. Elkins finally regains half guard but his face is busted up. 2 minutes to go. The damage continues and Elkins’s face continues to get worse, the canvas looking like a murder scene. Elkins gets full guard but he still eats another big shot before the bell. 10-8 Bektic. Elkins cut under each eye, over his right eye, on his nose. And more. The one over his eye is HUGE.

Round 2 – Bektic takes a couple quick punches and gets taken right back down. Elkins is able to get up quickly but Bektic has him tied up to the cage. If he starts working on that cut again, it’s gonna be bad. Bektic looks for a takedown, but Elkins is able to gain top control. Elkins landing knees to the body as Bektic gets to his feet. Bektic backs out of the clinch and lands a hard right. A couple more rights from Bektic, he goes for a takedown, they scramble and Bektic ends up on top. Elkins looking for an anaconda but loses it as Bektic gets to side mount. Bektic softening him up with punches. Some nice elbows from Elkins off his back to the side of Bektic’s head. Elkins gets to half guard before the bell. 10-9 Bektic.

Round 3 – Elkins lands an inadvertent kick to the groin and he gets a brief timeout. Big right-left combo from Bektic snaps Elkins’s head back. Bektic shoots in but can’t secure the takedown. Bektic shoots again, gets the single leg takedown. Darren goes for a heel hook but can’t secure it. Bektic gets to one knee against the cage as Elkins punishes his body with knees and lands punches to the head. Under 2 minutes to go. Elkins lands a couple hard rights as Bektic gets up, then lands a head kick and Bektic goes down face first as he is knocked out cold. What a freaking comeback from Darren Elkins!! Amazing!! Give that man 2 bonuses!

Take a look at the finish from Elkins and his reaction!

Look at @DarrenElkinsMMA reaction to the stoppage. Incredible!! #UFC209 pic.twitter.com/cK6qYN31Fn

Round 2 – Henrique eats a knee but keeps coming forward with the clinch takedown, and lands in side mount. Short elbows from Henrique but Tybura explodes to his feet. Henrique has his neck, lands a couple knees to the head though Tybura has his face covered. Henrique presses him to the cage. Ref wants action. He separates them after several warnings. They immediately go back to the clinch as Henrique goes for the takedown again. Ref again wants them to work. Boos from the crowd. They are separated again. Overhand right from Henrique but gets stunned with a front kick to the face. Henrique immediately clinches him up against the cage again. Ref Herb Dean again start telling them to work. They throw a few punches in the clinch but Henrique continues to look for the clinch. Tybura pushes him off and lands a right before the bell. 10-9 Tybura.

Round 3 – Big right cross, then a front kick to the face from Tybura. Another right hurts him but Henrique once again clinches him up to the cage. Ref wants work as the crowd starts booing again. Nice short elbow from Tybura, another one hurts Henrique as he stays on Tybura pressing him to the cage. Ref separates them and Tybura goes after him with an overhand right and high kick. He presses Henrique to the cage now, then goes for a takedown but Henrique catches him in a deep guillotine. He lets it go. Henrique is bleeding. Tybura hops on his back, then gets him to full mount with under 2 minutes to go. Punches, hammerfists and elbows start raining down from Tybura and Herb Dean stops the fight.

Round 3 – Right hand from Hunt as Reem tries to clinch. Right from Reem. Right hook from Hunt. Reem runs out of the way and the crowd boos. Knee to the body from Reem as he presses Hunt to the cage. Reem hurts him with a left elbow, right knee to the chin, one more knee and a left uppercut sends Hunt unconscious and face first to the canvas. … I have to say, it sucks seeing that happen to Hunt knowing he’s in a lawsuit with the UFC because so many of his opponents have been busted for performance enhancing drugs. He’s taken a lot of damage from cheaters in his career and that sucks.

Round 3 – Kelly has outlanded Rashad 48 to 18 so far in the first two rounds. Low kick from Kelly. Right from Evans. Again. Uppercut from Evans. Left hook from Rashad. Right, left. Kelly with a trip but he can’t take advantage. Evans finding his striking rhythm a little better now. Kelly continues coming forward though and also scoring. Left hook from Kelly, uppercuts inside the clinch. Rogan describes Kelly as “a zombie”. Nice uppercut from Kelly straightens Rashad up. Evans defends a nice throw attempt. They trade punches in the clinch. Body kick from Evans. Nice left from Kelly. Again. Dirty boxing from both guys. Nice right jab from Kelly. They trade some nice shots slugging it out. Rashad is warned for grabbing the shorts as they are almost ripped completely off Kelly. Fight ends in a slugfest but I give it to Kelly.

Just gonna be honest here. Rashad looks tentative and seems to lack some kind of confidence in his striking. This is not the same Rashad that KO’d Chuck Liddell. He never really bounced back to his full potential after the Lyoto Machida KO, and he was KO’d by Teixeira in his last fight in April of last year. I’m not sure how you would overcome that but others have done it, so it is possible. Sports psychologist maybe. Hypnotist?

Round 2 – They trade some leg kicks. Body kick from Vannata. He clinches, lands a right hook on the break. Vannata with a right, lands another right as Teymur throws a body kick. High level striking from both guys. Three big clinch knees from Teymur to the body. Vannata just eats them no problem. Spinning heel kick to the face from Vannata countering a high kick from Teymur. Teymur is cut up now by his left eye. Superman punch from Teymur knocks Vannata backward. He acknowledges it. Trip takedown from Teymur but Vannata is right up. Right hand from Vannata. Straight left from Teymur. One two from Teymur. Three clinch knees to the body and a right hand from Teymur. WOW! That was impressive and somehow Vannata just takes them. Those were hard knees. Replay shows Vannata partially blocked at least one.

Round 1 – Right hand from Tyron. Inside low kick from Thompson. High kick from Wonderboy blocked. Again. Crowd not particularly fond of this feeling out period. Woodley circling the outside. Wonderboy makes him miss on a couple punches. Nice straight left from combo as he gets in and out. Boos from the crowd now. Low kick from Woodley. Low kick counter from Woodley. Not much action here. Six significant strikes combined for the round. 10-9 Thompson.

Round 3 – Front leg low kick from Thompson. Woodley shoots, presses him to the cage. Gets a body lock takedown and is landing some punches from half guard. Woodley has Thompson’s right hand trapped behind him. Thompson gets his arm free, as Thompson gets up. Couple clinch knees from Woodley as Thompson pushes off to get distance. Body shot from Thompson, again. High kick blocked. Straight left from Thompson. Side kick to the body. Switches stances, again. Straight left to the body. Again. Right hand from Woodley scores. Body shot Thompson. They trade shots, left hook from Thompson. Woodley’s best round so far but still fairly close.