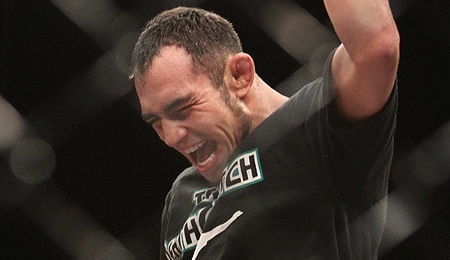 At 154.5 pounds UFC lightweight contender Tony Ferguson was all set to challenge Khabib Nurmagomedov for the interim title at Saturday’s UFC 209 card. Unfortunately, as previously reported, Khabib was removed from the card after complications from weight-cutting sent him to the hospital. It’s not the first time Khabib has had trouble making weight and this has to be a huge letdown for Ferguson after preparing for so many weeks and doing so much media leading up to this fight.

However, “El Cucuy” seemed to be genuinely concerned for Khabib’s health in his response to the unfortunate news:

@TeamKhabib I Hope U Feel Better Khabib, I Pray For Your Recovery, I Mean It, Get Better #Road2Gold #TonyFergusonMMA #UFC209 @ufc @danawhite

What’s next for Ferguson or Khabib is not yet known. Will Ferguson get an immediate shot at Conor McGregor’s lightweight title? Or will they try and reschedule the interim championship once Khabib is eligible to compete again?

It’s interesting to look back at what lightweight champ, McGregor, had to say after UFC 205 when he won the title from Eddie Alvarez and was questioned about a potential matchup with Khabib, who had submitted Michael Johnson on the same card.

It’s evident Mystic Mac knew what he was talking about.