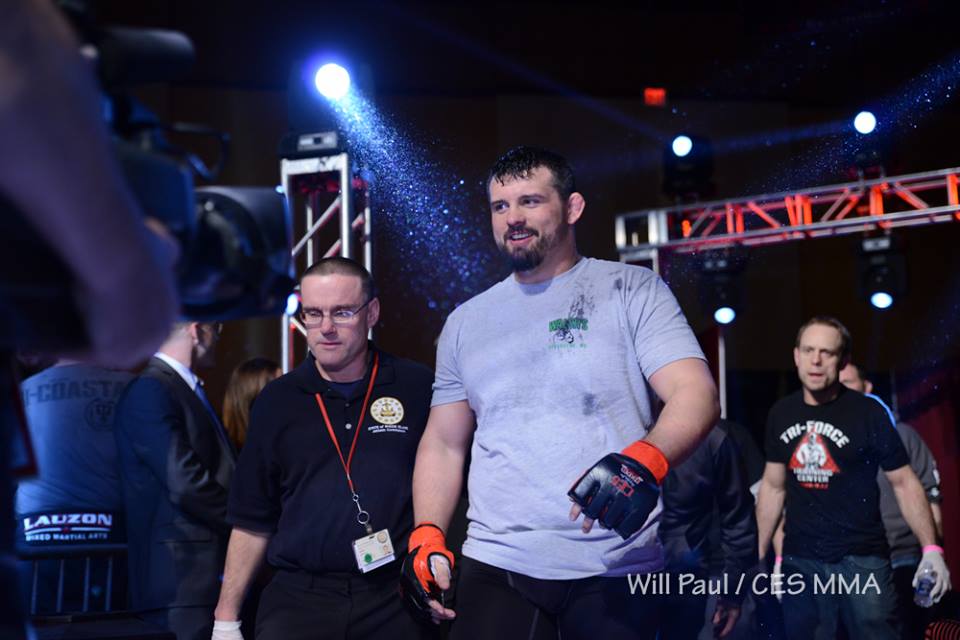 Before UFC vet Pat Walsh returns to action against Dirlei Broenstrup at CES 42 on March 31 in Lincoln, R.I., LIVE on AXS TV Fights, the former Ohio State wrestler sat down with ProMMANow.com.

The interesting thing is, he started fighting in Mass. And he said his record was only 4-2 when he started fighting in Mass. And I went up because they had offered me Cody Lightfoot for a promotion so I drove up to New Hampshire to watch Cody Lightfoot versus him in his first fight in Mass and his coaches had lied about all of his fights in Brazil — so he knocked out Cody in the first round. Later when I saw him again, people at the show were saying, “That guy has a bunch of fights in Brazil that he’s not disclosing.” Then I saw more recently that they had changed his record. Anyway, I had gone up, and saw him live — it was only a short fight — probably a minute long and he knocked him out with an overhand or a straight right. I kinda had him on the radar from then and then CES might have mentioned it before and it didn’t work out. I actually looked at his videos and stuff and I’m definitely familiar with him.

What does he bring to the table you have to be aware of?

He seems scrappy. He’s actually a really good wrestler. He’s definitely able to wrestle guys. That’s not something that’s going to affect me, but he definitely has a strong game — he seems like he has some skills with his hands and kicks — he’s active, he’ll run through the takedown. But it really makes it a good matchup for me where I’m not really worried about him because he seems like he goes back to a clinch when he gets uncomfortable. He throws a lot of good knees but when he’s clinching up on me — that’s where I have my throws. His strengths are also my strengths so if anything I think it’s a great matchup against his style.

What will this win mean for your career? Is this the last one you need for an UFC opportunity?

I think this is the last one I need for CES to throw a belt on me. Although I’m still looking and hoping the UFC will have a drop out quick and I can take a short notice fight and get back in. For UFC 209, they had Mark Godbeer from England’s opponent, Todd Duffy, drop out recently so I went on Facebook looking for the matchmaker for the UFC, looking for his contact info. Pat Sullivan was actually the one who responded and he got ahold of Mick saying that I was more than happy to take the fight. Unfortunately they had just filled. I do think I’m in good standing to go back in the UFC, now, but I’m excited to have another three fights before I have to go. I’m going to have this fight, and then whatever Pat Sullivan wants to put a belt on — 205, 225, or heavy — I told him, “Whatever works for them.” I just want the CES belt, then I want to defend it, then there should be no reason I’m not back in the UFC.