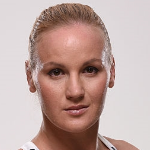 UFC bantamweight Valentina Shevchenko wants a rematch with champion Amanda Nunes. At UFC 196 the fight ended with Amanda getting the decision nod and it has burned Valentina ever since. Here’s what she told TMZ:

Give me the date. This is what I want. This was my goal from the beginning: the belt of UFC. It wasn’t successful from the first time because I think I missed my opportunity when I lost to Amanda. For the second time, I will not lose.

She knows that I’m a dangerous opponent for her and she will try to avoid this fight. Maybe she’ll be like ‘let’s do it later’ or maybe she’ll say ‘I want it at 145,’ looking for any kind of reason to avoid the fight because she knows I’m dangerous. I know that she’s dangerous. I’m ready to fight.

After Nunes just demolished Ronda Rousey we can’t figure out why anyone would want to fight her.