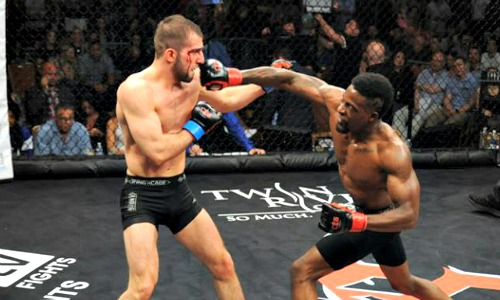 Before top New England prospect Marquis Brewster tries to improve to 3-0 at CES 42 on March 31 in Lincoln, R.I., the Providence, Rhode Island product sat down with ProMMANow.

What do you know about your opponent? What are your thoughts on him as your next target?

As an opponent, I haven’t taken a lot of time to look into him. But for the most of what I did get about him, he’s a wrestler. He’s a head-first kind of guy, he wants to take the shot — take you down and wear you down on the ground a bit. I guess he trains jiu-jitsu at one of the Gracie schools, but that’s pretty much all I know. His amateur record wasn’t that good. As far as experience is concerned, I don’t think he stands on the same platform as me, to be honest with you.

How good are you, Marquis? A lot of guys might be fooled by your early record, but just how good of a fighter are you?

To be honest with you, I think I’m getting better at being more well-rounded. I still have some flaws as far as my jiu-jitsu is concerned, but being an all-state wrestler I know the grind and I train boxing with one of the best boxing coaches in the game, and I feel that gives me an edge on a lot of these guys who just train MMA stand-up because I did a lot of boxing. It’s like night and day from a boxer to an MMA guy. I feel that gives me an edge and that’s why I feel like I’m a good fighter. I know the grind on the ground, I know the grind against the cage, and I know how to throw my hands around.

This fight right here? Knockout, definite knockout. I watched his hands and him move around in the cage and I don’t feel like he’s comfortable and I feel like I’m going to exploit that. I could take it wherever I want. With my takedowns, I’m going to be stronger than this kid — it doesn’t matter. I’m going to take him down and slam him on his head. Play around with him, things I like to do.