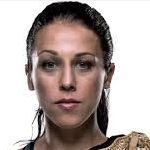 On Thursday Joanna Jedrzejczyk announced she will defend the UFC straw weight belt against a very game Jessica Andrade at UFC 211. The fight will happen in Dallas on May 13 of this year along with Stipe Miocic who will defend his heavyweight title against Junior Dos Santos. Joanna is 13-0 and Andrade is 16-5 heading in to this bout.

Here is the main card for the event: