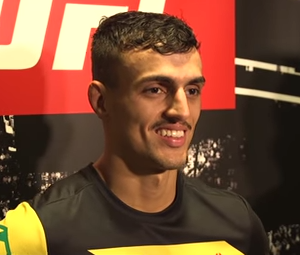 Sao Paulo’s Ricardo “Carcacinha” Ramos (10-1) made his octagon debut earlier this month when he faced Japanese bantamweight Michinori Tanaka (11-3) at UFC Fight Night 104 in Houston. The 21-year-old former Elite Fighting Championship titleholder was discovered on the season 2 premiere of Dana White’s Looking for a Fight reality series last year and did not disappoint in his big show debut. Ramos went three rounds with Tanaka and picked up the unanimous decision win on the judges’ scorecards.

ProMMAnow.com caught up with Ramos after his UFC debut with a few rapid-fire questions.

What was your favorite part?

The walking out. When I saw the octagon.

What was your least favorite part?

I don’t remember any bad times. But diet is always the worst part.

What was the hardest part?

Cutting weight is always the worst time, and all paperwork.

What was the easiest part?

Fighting is the easy part.

What was the strangest part?

The UFC level compared the events I fought before. It’s really the best.

What was the funnest part?

The backstage before the entrance. I took off in that moment.

What are you looking forward most for your next UFC fight?

I want to improve now to be able to face the tops of the category.