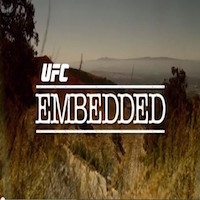 In episode 2 of UFC 208 Embedded. Ronaldo “Jacare” Souza wraps up his training at X-Gym in Brazil, then he and teammate Anderson “The Spider” Silva head off to Brooklyn for Saturday’s fight card. Headliner Holly Holm hangs out and grabs a latte with her mom, while her opponent Germaine de Randamie gets in some pad work and catches a soccer game before she heads to New York. Derek Brunson lets cameras into his gym where he runs through some drills. And “The Spider” sees how long he can hold his breath under water.

UFC 208 will be held Saturday, Feb. 11 from Barclays Center in Brooklyn. The event will broadcast live on pay-per-view, with preliminary card action airing live on FS1, and early prelims streaming on Fight Pass.