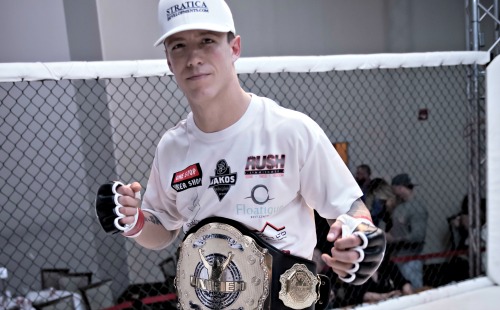 Before Garret Nybakken tries to defend his Unified MMA Lightweight Championship against Tristan Connelly in the main event of Unified 30 on March 17 in Edmonton, LIVE on FITE TV and GoFightLive, the red-hot 155-pound contender spoke with ProMMANow.

When I was younger, I used to do amateur boxing. I went to a few of the local MMA events, and I decided that this was something that I needed to do. The rest is history.

What were your goals when you began training?

(Laughs) Impress some chicks and look tough for my friends, basically.

(Laughs) That being said, are you satisfied with what you’ve accomplished so far?

I’ve definitely impressed a lot of chicks and have looked pretty tough in front of my friends, so I’ve set my goals a little higher than that (laughs). I think things have gone very well, and now I’m fighting more for myself than anything — and also for chicks (laughs).

How excited are you for this next fight?

I’m super excited. This is going to be Fight of the Year, even though I’m going to finish him really quick.

How would you bet this fight is going to end?

I’m wrong every time now when I try to predict my fights, it seems. The only thing I wouldn’t bet on is a decision, not a chance (laughs). This one isn’t going past the first two rounds. I feel the same way he does, but it definitely isn’t going to play out the way he thinks it will.