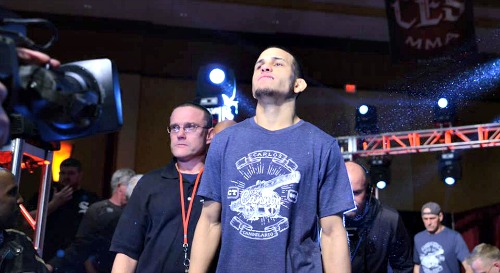 After improving to 5-0 with a submission win over BJJ brown belt Miguel Restrepo at CES 41 on Friday night in Lincoln, R.I., LIVE on AXS TV Fights, Connecticut’s Carlos “The Cannon” Candelario sat down with Pro MMA Now.

What are your thoughts on how Friday night played out?

Oh man, I really wanted to strike a lot more (laughs). The whole game plan was to box him up using distance and angles. But when you go out there and someone challenges you to their game, you want to go in there and beat him. When I saw him in a gi in the back, I knew I had to submit him (laughs). I knew what I had to do. I train with great guys on the ground, so I was ready. I was disappointed I didn’t really take advantage enough of my opportunities standing up, but as (CES MMA boss Jimmy Burchfield Jr.) said in one of his comments to me, “You’re living and learning.” That’s what I’m doing. I just want to keep on learning.

What did you learn from Friday night, submitting such a high-level opponent on national television on AXS TV Fights?

I learned that anything can happen in there, and I learned that I’m good at adapting to it. I also learned that I get hyped when I see the lights and the cameras; it makes me perform better and want to put on a show. Even though it was more of a grappling fight, a lot of people told me that they enjoyed it. I love hearing that (laughs).

Whatever CES wants to give me. I’m still young in this game, 5-0 now, and I feel like I have a lot to prove. But whatever they have to give me, I’m ready for it. I’m down. I see a title fight around the corner. I’m ready for anything.