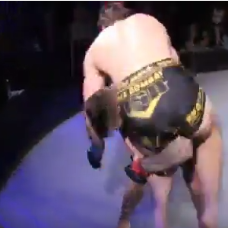 Next Level Fight Club heavyweight champ Allen Crowder nearly sent his last-minute replacement opponent Chase Gamble through the cage floor Saturday night in Raleigh, N.C. Crowder retained his belt in the NLFC 6 main event with this brutal slam that bounced Gamble’s head off the canvas and knocked him unconscious. The event aired live on FloCombat and they’ve got the devastating footage right here.

Crowder improved his pro record to 7-2, 1 NC with the knockout. He’s only gone the distance once. Keep an eye on this heavyweight prospect out of North Carolina.