Interview: Cindy Dandois wants to fight Cris Cyborg and doesn’t care what she tested positive for 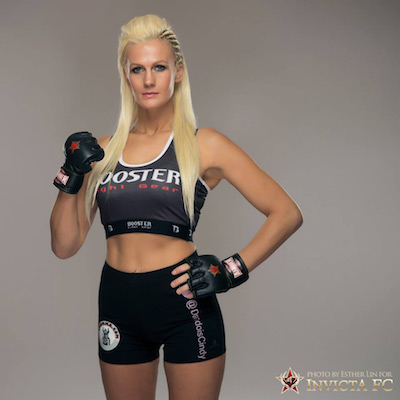 Belgian fighter Cindy Dandois holds a decorated mixed martial arts record of 8-2 with wins over the likes of UFC vet Jessamyn Duke, Bellator MMA top contender Marloes Coenen, current Invicta FC interim featherweight champion Megan Anderson, and Muay Thai standout Jorina Baars, who holds a win over Cris Cyborg in kickboxing. Despite this many MMA fans still don’t know who “Battlecat” is or what she is all about. Pro MMA Now recently caught up with Cindy to try and remedy that.

I started MMA because I had to lose pregnancy pounds. My brother was my influence. He had his own gym so I could train in his school for free. Perfect Team MMA. Also I was a big fan of Gina Carano. My background is mostly judo and freestyle wrestling.

Some people did support me and some didn’t. My brother was very supportive. My mom didn’t like to see me fight like that. My father was supportive but also kind of worried.

The fighting is the fun part… the biggest challenge is finding fights and be motivated while waiting for fights. Also the combination of a full-time job, single mom and a household is very hard and challenging.

You continued MMA after child birth. This feat is praiseworthy as a lot of women might stop chasing their dreams after having a kid. What drove you further? And does being a mother affect you in the cage any way physically or mentally?

I stopped after getting my youngest daughter of 5 years. I didn’t do any MMA for over three years. Then I met Miesha [Tate] and she pushed me back into fighting. Being a mom does affect me. I want to prove to them that they can do everything with God and hard work. They don’t have to let anybody tell them they cant. The most difficult part is combining everything and that I have to miss them sometimes.

You hold a record of 8-2. You have defeated some of the best female featherweight fighters, yet you have not got a crack at any of the featherweight titles in MMA today. What is the reason according to you? Do you agree that you have always been considered just a contender by the masses and not a legit threat and what do you think is the reason for such assumption?

I think I am a very underrated fighter. They don’t take me serious and they don’t see me as a real fighter. Point is I don’t have to look like an athlete. And I don’t need to have big muscles to perform or to do what I do. IT Works… Thats it. Also the fact that I live in a small country as Belgium doesn’t help me I guess.

I don’t care what she says… she tapped and that’s the truth. If I face her again it will be in the UFC. I don’t see any point in facing her again in Invicta for very small money and for no respect. I don’t need to use her name. I’ve beaten girls better than her and with more wins and a bigger name. She can talk shit now but I am that red dot on her record and thats the fact. I think she did a great job getting that belt. That was a nice fight. Congrats to her… but she got more opportunities and Invicta made work of building her. Nice thing but they should promote girls evenly.

Holly Holm will face Germaine De Randamie to crown the inaugural UFC women’s featherweight champion. Many people have said the match doesn’t make much sense as Holly is on a two-fight losing streak and has never competed in MMA at 145. Germaine has not fought at 145 for a long time. What is your take on the situation? Also, you recently said you expect Germaine to knock out Holly. Do you think you will be able to beat Germaine or Holly if given a chance?

At first I was surprised by that choice. But I get it… those girls are already signed and with the USADA-Cyborg case it makes sense. I think if I can make it to the ground I can beat both of them… and if they can keep it on the feet, both of them can beat me. So it would be a war for sure. I would love to have the opportunity. But I know already how this world kind of works, so I don’t count on getting chances. I will have to prove myself over and over again.

Cris Cyborg was recently tested positive for banned substance. Thoughts on this? You have always been vocal about your desire to face Cris Cyborg. Do you still want to face her and what is your message for her?

I don’t want or need to GIVE an opinion about this. Let’s wait [and see] what the test results say and what the commission decides. I still want to fight her. It would be an honor, an adventure and the biggest test of my career. So Cris… if you come back… I am still here, I don’t care what you got tested positive on. We both have the same God… Lets do this!

Do you think UFC will contact you in near future and which division would you be competing in bantamweight or featherweight? What is your message for UFC management?

I don’t know what that Union is. And the fact that I have to work full-time to pay my bills and provide for my kids says enough.

All dreams can come true, if we have the courage to pursue them.