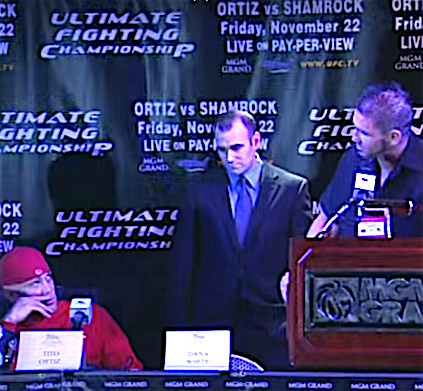 In honor of what is said to be Tito Ortiz‘s final fight this weekend at Bellator 170 when he faces Chael Sonnen, let’s take a look back at one of the most entertaining Tito moments in history. The incident occurred in November 2002 at the UFC 40 pre-fight press conference between he and Ken Shamrock. Tito was affectionately known as “The Huntington Beach Bad Boy” in those days and he would end up defeating Ken via TKO in the fight in what was his fifth successful title defense as UFC light heavyweight champion.

“I hope to God that you come ready, because if you don’t I’m going to beat you into the living death.” -Ken Shamrock

At the presser Ken was talking smack and tells Tito he better come ready or he’s going to beat him “into the living death”. At this, a young pre-TRT UFC President Dana White smirks, while Tito busts up laughing at Ken. This upset “The World’s Most Dangerous Man” and he kicked a chair next to the podium causing the chair to fly up only to be caught mid-air by the lightning quick reflexes of White. Tito then stands up and they have to be separated. The bad blood continued on at the weigh-ins as well and you can watch it all in the video below. It’s a priceless moment in mixed martial arts history and one hardcore fans will never forget.

Here’s how the bad blood originally started between Tito and Ken:

What was your favorite Tito Ortiz moment?