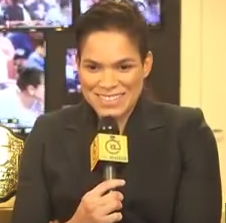 Amanda Nunes is the first Brazilian UFC female champion. She is also the first openly gay UFC champion. Now Nunes wants to move up to 145-pounds and be the first woman in UFC history to win two belts in two different weight classes. She already holds a win over Germaine de Randamie, who is facing Holly Holm for the featherweight title at UFC 208. So “The Lioness” told fans during a Facebook live chat with The Buzzer on Tuesday that she would prefer to face Holm for the 145 title.

The champ also holds wins over Miesha Tate and Ronda Rousey and she revealed who she thinks is the better fighter between the two. Surprisingly, she also said she actually took time off during her training camp for Rousey: