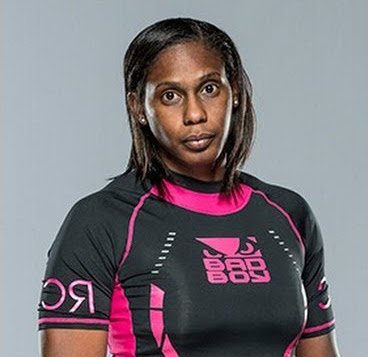 Latoya “Black Mamba” Walker is one of the most popular and talented female featherweight fighters today. The 37-year-old Austin, Texas native holds a record of 5-1 with her most notable victory coming against former TUF 18 contender Peggy Morgan in April 2015. Latoya was last in action in May of last year when she battled Charmaine Tweet at Invicta FC 17 but unfortunately came up short. We haven’t heard from “Black Mamba” since that fight but she agreed to take some time and answer a few of our questions to catch up.

One of my buddies when I worked as a personal trainer thought I’d be good at it. My background is boxing, jiu jitsu, and some Muay Thai.

Did people around you support the decision of taking this sport as a career? Who would you like to credit for your success?

Everyone pretty much supported the idea. I’d like to credit my coaching staff and training partners for my success.

What challenge have you faced in your journey?

I’ve come across some changes in my coaching staff and then missed training with some key partners during contracts.

One of the most discussed topics today is fighter pay. What is your stand on the situation? What are your thoughts on a fighters union?

I full support a fighters union. The pay is not very good for the fighters. Many professional athletes can comfortably support themselves and their families except for MMA fighters.

You lost your perfect record in your last fight. How has it affected you?

It doesn’t affect me at all. Numbers are numbers. I do not feel weaker, but I do see the mistake that was made.

What are your thoughts on your next fight?

Right now I’m a free agent, so we’ll see who I get a good offer from.

Invicta FC 20 will see Charmaine Tweet lock horns against Megan Anderson. Tweet’s last victory came against you. What are your thoughts on the match? Do you have any plans on facing her again and whom do you think will walk out with the win?

I got cocky, gave her too much space and got caught with a lucky shot. Shit happens, as they say, “Even the sun shines on a dog’s ass every now and then.“ She’ll probably shy away since my stand up is better. I’m not sure, I haven’t really seen Megan fight to judge.

UFC recently announced a match between Germaine De Randamie and Holly Holm to crown the inaugural UFC featherweight belt. Thoughts on the match? Will you be interested in moving to UFC roster if you get the opportunity?

I’ve always been a fan of Holly, so I’m going to go with her. I would like to have that opportunity to fight in UFC.

Recently Cris Cyborg was tested positive in a drug test, this is the second time Cyborg has failed a test. Thoughts on the scenario?

That really sucks for her. Taking substances run that risk and when you get popped, you have to deal with the consequences.

I’d say to have something to fall back on since the pay is not the best.