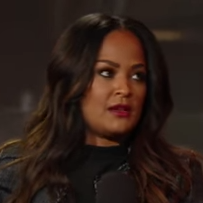 Laila Ali said it was sad to see Ronda Rousey‘s fall from grace and how the fans turned on her, but it was because they bought into the hype and it was a big letdown for them. Laila feels Rousey’s chin got exposed against Amanda Nunes, she really can’t take a punch, and if she comes back everyone will be going for it. “I remember when they wanted to see us fight,” Laila recalls. “And now they want to see me train her.” Asked if she would indeed be willing to train Rousey, Laila said, “You can’t really train somebody’s chin to take a punch, but for the right amount of money, yeah we could probably make it happen.” Laila believes also Rousey shouldn’t have fought a strong puncher like Amanda Nunes coming off a knockout loss to Holly Holm in late 2015. She feels they should have put her against a lesser opponent first so she could regain her confidence in the Octagon. Laila does not believe ring rust was a factor either. “I could get in the ring right now and I wouldn’t get beat like that,” she said. “Even if you lose a fight in the end, I want to see you be able to take some punches, be in the fight, and maybe at a certain point you get tired or wear down because you have the ring rust.” Not the case here says the former boxing champ.