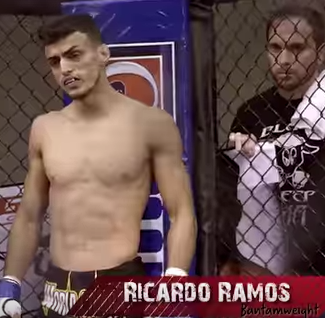 UFC President Dana White announced on the newest episode of “Lookin’ for a Fight” that he was bringing on-board 21-year-old Brazilian bantamweight Ricardo “Carcacinha” Lamos (9-1) after seeing him handle Alfred Khashakyan (8-3) at an NEF event this past Summer. Ricardo is also a Legacy FC veteran with eight of his nine wins coming via stoppage.

It took some time to get everything lined up, but watch as Ricardo’s coaches announce the big news to he and his teammates at this recent training session in this exclusive video obtained by ProMMAnow.com.

It’s an intense moment of having worked so hard to see a dream fulfilled. It’s the feeling every MMA fighter dreams of having one day, to get the word that you have been signed by the major leagues. You may not speak Portuguese but the emotion of Ricardo having his dream fulfilled crosses all language barriers. And to see the support and admiration of his teammates and coaches shows us that although one man goes into the cage, he did not get there by himself and they all celebrate this milestone together.

We caught up with Ricardo to get a few words.

When did you start training MMA?

I started Brazilian Jiu Jitsu when I was 13, then had my first MMA fight at 15.

It was very natural for me, fighting is my life.

You really have never had a easy fight in your career? Who has been your toughest opponent?

Allen Nascimento is the toughest fighter I have fought.

What are the advantages and disadvantages of starting your career so young?

No disadvantages, advantages I have longer time to reach my goals.

When did you find out about Dana offering you contract?

Several months ago, but we could not say anything until UFC announced it.

What is the craziest thing that is happen to you in your short career?

I fought in a USA Casino when I was 18, I won the fight, and then security came right up to me and said I had to leave because I was too young, and could not watch the rest of event…

God, my team, friends and family.

Check out Ricardo’s appearance on Lookin’ for a Fight in the video below.

Stay tuned for news on Ricardo’s first fight inside the Octagon.