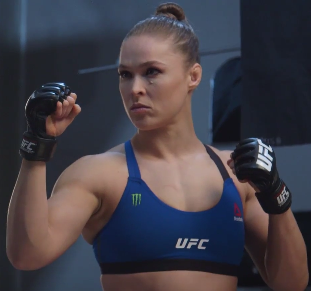 This is one of the few places you’re going to get to see Ronda Rousey heading into UFC 207 as she’s under a self-imposed media blackout to focus on her bout against Amanda Nunes as she attempts to regain the title. In this second episode of UFC 207 Embedded Rousey gets presented a unique gift from Marvel comics and says that winning this fight is the only thing she cares about right now. She also has a few laughs while cutting a promo — so it’s not all dead serious. Also, Dominick Cruz gets sushi, but has to pass up on some tamales due to cutting weight. Cody Garbrandt celebrates Christmas with his mentor Urijah Faber and the Team Alpha Male family. He is also eating s’mores just five days out from the fight. Amanda Nunes and her girlfriend do laundry on Christmas.