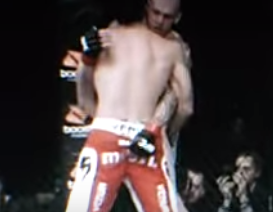 The much-dreaded “oil check” is an old wrestling/grappling move where one competitor actually penetrates his opponent’s rear-end with a finger(s) during the match. The rarely seen move made a big stage appearance at UFC 122 in 2010 when Krzysztof Soszynski went to third base with fellow light heavyweight Goran Reljic inside the Octagon.

Krzysztof ended up winning the match via unanimous decision. Did his oil check move play a role in the victory? We’re not sure, but can only hope Krzysztof washed his damn hands as soon as this match was over.