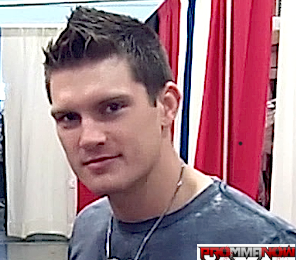 UFC welterweight contender Stephen “Wonderboy” Thompson spoke on BJPENN.com’s Rapid Fire recently. He talked about the return of Ronda Rousey and what she is up against when she faces Amanda Nunes at UFC 207 on December 30th for the bantamweight title she once held.

Man, let me tell you Ronda Rousey has a Monster on her hands to be honest with you. Of course Ronda`s last fight she fought a very good striker in Holm, who was not very good at jiu-jitsu as we saw Miehsa Tate take advatnage of that, but this champion she is facing man is just very good at everything. Nunes has heavy hands. Hands that will knock you out and she has solid jiu-jitsu and wrestling. So I think it is going to be a very exciting fight. I am not the type of guy to go out there and make predictions for other fights, mainly because you never know what is actually going to happen in a fight, but I do know this will be a very exciting fight. Ronda Rousey is going out there with something to prove and I really cannot wait for that fight to be honest with you.

Can Ronda regain her championship or is this another crushing defeat waiting to happen?

1 thought on “Wonderboy gives his take on Rousey vs Nunes”