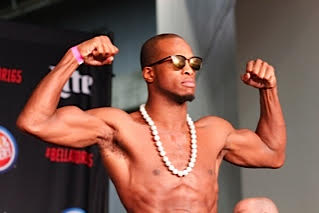 All fighters have stepped up to the scale making weight with its petition for victory at the official weigh-ins for the Bellator 165 event taking place Saturday night at the SAP Center in San Jose, Calif. Two fighters of equal weight and measure will enter the Bellator cage and only one will exit victorious. Bellator 165 features one of the most anticipated battles of the year as former Missouri Tiger Wrestler Michael Chandler is set to defend his Lightweight title against the very explosive and talented former Ultimate Fighting Championship (UFC) and World Extreme Cage fighting (WEC) champion “Smooth” Benson Henderson. Both fighters who are balanced on paper and weighing in at 155 lbs, have stepped up to the scale in preparing for its contested trial.

Also highlighted on the fight card is undefeated Welterweight star Michael “Venom” Page, renowned for crushing the skull of Evangelista “Cyborg” Santos at Bellator 156, who is set to go to battle against local favorite Fernando Gonzalez. In favor of balanced gender equity, Bellator will also feature the premiere of pro MMA female fighter Keri-Anne “Scari Keri” Taylor-Melendez against Sheila Padilla.

Since the 15th century, Lady Justice has often been personified as the symbolic fight figure at its trial, blindfolded and who is seen holding the proverbial scale and sword. The blindfold represents objectivity where final justice or its outcome is dealt without fear or favor, regardless of the entitlement of money, position wealth, fame, power, or identity. The sword represents law and a swift and decisive verdict which inside the cage may be dealt via knockout or submission — or even on the judges’ scorecards.

May the best and most-skilled fighters reign supreme.

ALL PHOTOS BY PHANTOM STREET ARTIST FOR PRO MMA NOW

ALL PHOTOS BY PHANTOM STREET ARTIST FOR PRO MMA NOW