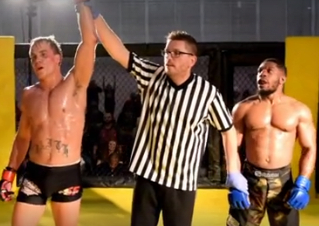 Rising featherweight talent Nate “The Train” Landwehr of SSF Academy in Clarksville, Tenn. took on South Carolina’s No. 1 145-pounder, Solon “Solo” Staley, on Saturday, Nov. 5, in the main event at A&A Fight Time Promotions’ “A November to Remember” pro/am MMA event at Austin Peay’s Foy Recreation Center. Staley was tough as nails and stayed in the fight for three full rounds against the hometown hero. Both guys did damage and both guys took damage. In the end the judges gave the unanimous decision nod to Landwehr, and in a post-fight Facebook live stream Staley said he couldn’t really argue with the result as no one had ever busted him up quite like Landwehr had done. A real classy guy and a future star for sure, Solon Staley. It was an exciting and competitive fight that had the crowd on their feet and chanting for “The Train” to bring one home for the locals, and he did just that.

The Clarksville native improves his pro record to 8-2 now, having come off a first round knockout win over UFC vet Diego Saraiva in March. A former XFC and AXStv television standout, Landwehr always comes to fight and put on a show and has been known to bust a backflip off the cage after a victory. In a sport that has sometimes been known to see padded records get first shots at the big shows, Landwehr stands has one who has consistently faced top tier talent and much more often than not, come out on top.